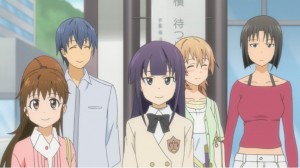 NIS America has licensed a new comedy anime that will make its North American debut next March. Wagnaria!! (known in Japan as Working!!) centers around the staff of a family-style restaurant (think Denny’s in Japan). The release will feature all 13 episodes in one set along with an artbook and collector’s case.

The Working!! TV series made its Japanese debut in April of this year and is based on Karino Takatsu’s manga of the same name. Wagnaria!! follows Sota Takanashi who gets a part time job at the Wagnaria restaurant after being asked by Popura, one of the waitresses there. Sota’s obsession with cute, little things drives him to want to work together with the diminutive Popura, but the rest of his newfound coworkers might make him regret his impulsive decision.

The show’s site is now up with character information and screenshots.

This Complete Series comes with 13 episodes with 2 DVDs, and the NIS America’s trademark hardcover artbook in a collector’s case.

About WAGNARIA!!
The family restaurant “Wagnaria” stands by itself in Hokkaido. One day Sota Takanashi, who loves all things small, meets tiny little Popura, who offers him a job working part time at the restaurant. Attracted to her petite stature, Sota accepts her offer. To his surprise, the restaurant is filled with eccentric characters. Get ready to dish up some wacky comedy together with Sota and his coworkers!

Original Work
WAGNARIA!! is based upon the Working!! manga by Karino Takatsu that first appeared in the January 2005 issue of Square Enix’s Young Gangan magazine.