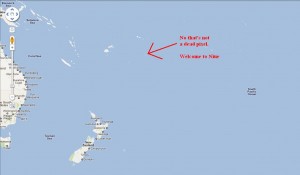 Niue is an island country in the South Pacific Ocean. It is also known as the “Rock of Polynesia”. Much like Taiwan is to China, Niue is only partly Sovereign. It is a free associate of New Zealand, meaning it lacks full sovereignty and all Niuens are considered Citizens of New Zealand. New Zealand also speaks on its behalf in all foreign affairs.

This also means that New Zealand mints the currency for Niue. Coming soon New Zealand will be minting a new set of collectors currency for Niue. It will be Star Wars Themed. Luke, Leia, Vader, and Yoda are confirmed. Even though they are meant to be collectors items they can be used as legitimate currency. Each coin will be worth $2 NZD, but to buy the set of 18 coins will cost $566 NZD ($470 USD). The Heads side will have the Star Wars character while the Tails side will have the face of Queen Elizabeth II. As a former British Colony she is still considered the Head of State.