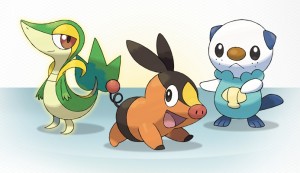 The official Pokémon site for Pokémon Black and White has gone live, and features the official names of the English starters among other things.

The games will take place in the Unova region (called Isshu in Japan). The grass starter (unofficially dubbed Smugleaf) will be called Snivy, the fire starter is Tepig and the water type will be Oshawatt. I can’t say that any of those names jump out at me, but that’s what the rename function is for. The Black legendary is a Dragon-Fire type called Reshiram while the White pokémon prize will be Zekrom, the Dragon-Electric type.

The site also has a pictures of the Unova region and the starters, but doesn’t offer much other information at this point. The fifth generation Pokémon games are still listed for a Spring 2011 release on the Nintendo DS.