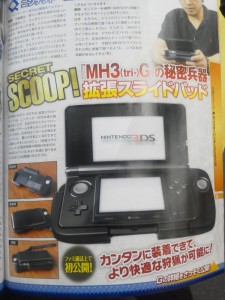 Remember that rumor that Nintendo would be making an attachment to the 3DS to allow a second analog stick?  Well that kludge is real and uglier than you could imagine.

This pic of the next Famitsu magazine gives the ugly details.  As you can see the add-on wraps around the system adding another inch to the system.  Based on where it wraps your wireless switch will get covered, as well as the game cart slot.  The add-on will also feature an R2 shoulder button on the top so the sytem will have  R1, R2 and L1 shoulder buttons, but no L2.  The article also hints at a port of Monster Hunter Tri that will use this second analog stick.

Christ! if their going to kludge the system couldn’t they at least added a battery pack to the wrapper?  And this will obviously be only a temporary kludge.  Kinda like lights for the various Gameboys before they started adding in back lights.

Seriously Nintendo, you released the system too early.   You should have worked out all the designs before release.   Even if this attachment is only for use with Monster Hunter, now you won’t be able to sell the stock of systems you already have as anyone who still wants one is going to wait for the expected new model that has all these buttons integrated. 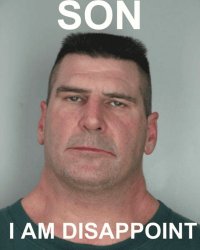