This year, five is a magic number. Why? Because The G.A.M.E.S. Blog turned five back in April. We have been celebrating this by bringing you features and reviews from video games and anime that involve the number five. When my turn came, I decided to go all out and plaster the number five all over my anniversary special. What better way to do that then to do a review of an anime that combines two of my favorite things: anime (duh) and music. So without further ado, here is my review of Interstella 5555! 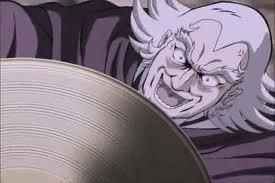 Back in the 1980s, the release of the ironically named “Video Killed the Radio Star,” music video ushered in a new way to look at music. Instead of just listening to the songs, we could now watch as a story unfolds, adding a new dimension to music. This also opened the door for all sorts of experimentation to see where exactly we could take music. There were many innovations, including using animation in music videos; one of the best around that time being Peter Gabriel’s “Sledgehammer,” which featured both live action and stop motion animation. As more people experimented, all sorts of animation techniques were used, and it was only a matter of time before anime became involved. Throughout the years, anime has been a successful influence being used in such videos as Linkin Park’s “Breaking the Habit” and Britney Spear’s “Break the Ice.” But there was one band who took it to a new extreme by creating a feature-length music video. This was Daft Punk, and their masterpiece was Interstella 5555: The 5tory of the 5ecret 5tar 5ystem (those aren’t typos, the letter S is replaced by the number 5).

Interstella 5555 is a 65-minute music video that is based off Daft Punk’s Discovery album. During production of the album, Daft Punk was working on a story to go with it, which was inspired by science fiction combined with the emerging entertainment industry culture. After the album was complete and story fully written, they went to Japan to seek out their childhood hero Leiji Matsumoto to animate the story, to which he happily agreed. Released in 2003, Interstella tells the story of four musicians who live on a planet of blue-skinned humanoid aliens, who are dancing to their favorite music act (unnamed at this point) as they are playing the song “One More Time.” During the performance, they are interrupted by a group of raiders who come in and kidnap the band. They are then taken to Earth where they are transformed and brainwashed into thinking they are human. They are christened the Crescendolls, and their names are revealed as Stella (Bassist), Octave (Keyboardist/vocalist), Arpegius (Guitarist) and Baryl (Drummer). They become instant successes thanks to their “manager” Earl de Darkwood, who uses the band for nefarious purposes. Meanwhile, a lone blue-skinned alien named Shep, who is an adoring fan of the band and is in love with Stella, follows the kidnapped band through the space portal they were sent into and launches a rescue mission to try and free the band

The magic that comes from Interstella 5555 is that there is no spoken dialogue at all. The story is conveyed through only the visuals you see and the music that is playing to accompany the situation going on. Each scene is based off one of the songs off the Discovery album. For example, after the Crescendolls are captured and brought to Earth they go through an automated sequence where their skin is turned human colored and their memories are altered to make them think they are human. During this process the song “Harder Faster Better Stronger” is playing, and its robotic and repetitive  feel accompanies the song perfectly. Each scene drives the story forward with no wasted time.

Being animated by Toei and Leiji Matsumoto (Galaxy 999 and Captain Harlock) Interstella resembles an 80s-era anime, and with Daft Punk’s music thrown in, it makes you feel like you are watching a classic one from the start. When on the blue alien homeworld, the character design becomes a little exaggerated as the aliens, especially the drummer have big toothy grins, and the environments around them are bright and flashy and give off that fun atmosphere. When on Earth, colors become subdued and everything gains a more realistic feel, as it should. It’s amazing to see how the Crescendolls are turned from their original blue skinned selves to looking like actual humans. They are each given a different personality and their skin color and clothing style are reflected by not only their personality but the ethnicities they are forced to take ranging from African-American to European. As Shep was never captured, he retains his blue skin, and it is interesting to see him wandering around the city as he tries to find away to rescue his favorite band, which combines and juxtaposes the two different art styles. 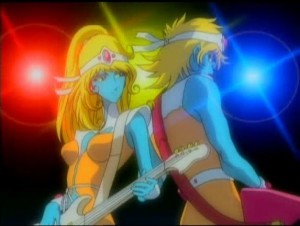 So it would be hard to talk about a hour-long music video without actually mentioning the music itself. As mentioned above, all of Interstella 5555 is based off of Daft Punk’s Discovery album. The most famous songs to come from this album are “One More Time,” “Digital Love” and “Harder, Better, Faster, Stronger.” For those newer to Daft Punk you might remember “Better, Harder, Faster, Stronger” being sampled for the Kanye West song “Stronger.” While these songs are the most memorable, every song on the album is given its own time to shine as each song plays a scene in the movie. “One More Time,” starts off Interstella with a fun atmosphere which slowly starts to turn sinister as the henchmen of Earl de Darkwood begin to descend upon the band, then when one of the members escapes, the next song “Aerodynamic” is playing while he tries to elude the captors but in the end it’s to no avail. After capture the scene’s focus changes gears from the band to Shep who is in his electric guitar shaped space ship fantasizing about Stella, accompanied by “Digital Love.” Each song tells a part of the story, whether its about Shep’s love for the band, the nefarious plans of Earl de Darkwood or just planet Earth rocking out to the biggest band in the world.

So, it’s an anime, it’s a music video, and it’s done by Daft Punk. That’s a combination that no one saw coming before it happened, and it’s one that we would like to see again. Since their formation Daft Punk has been revolutionizing house-style dance music and has been taking the world over by dabbling in both anime and film scoring (Tron: Legacy). Interstella 5555 isn’t just one of those niche anime’s that maybe a few people would enjoy, it’s an anime that even non-anime fans would enjoy. It’s got great music, aliens, a tragic love story, and it’s all done by Daft Punk. This is one movie that when you are watching and it ends you would annoy your friends because you would want to watch it…just one more time.