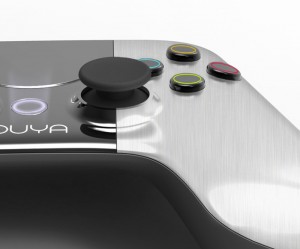 The recent video game Kickstarter trend continues, but this time it’s a console trying to get a leg up. OUYA, which brands itself as “a new kind of video game console,” launched a Kickstarter today with the goal of $950,000. As of 8 p.m. EST, it is already approaching $1.5 million raised with 29 days to go.

When it comes time for the system to hit the market, OUYA’s goal is to set the launch price under $100 for the console with the added bonus that every game developed for it will have some free-to-play version. Be advised that according to the developers, this could mean simply a demo version of a title which then could require a purchase for a full game. This also means that the game creators can set their own prices for everything, which could be a double-edged sword.

On the other hand, it does offer aspiring game developers one big advantage over the current consoles: every console has a built-in development kit for free. The system runs on the Android platform, meaning that phone and tablet apps can easily be ported and released for OUYA. Of course, graphics designed for a 4″ phone screen aren’t going to hold up well on a 50″ HDTV, though. This open transfer of software isn’t limited to games you can play either, as OUYA has already reached an agreement with Twitch.TV to port their app to the system, allowing you to watch a variety of game-related programming streams.

As with any new console, specs are important as they set the limits for what the console is capable of. So without further ado, here are the target specifications for the system:

Not a terrible setup for less than $100. It will certainly be interesting to see where this console goes, and we’ll keep you posted on any new developments. Is this a viable set up? Are you willing to chip in and make it happen? Only time will tell, but let us know your predictions in the comments!