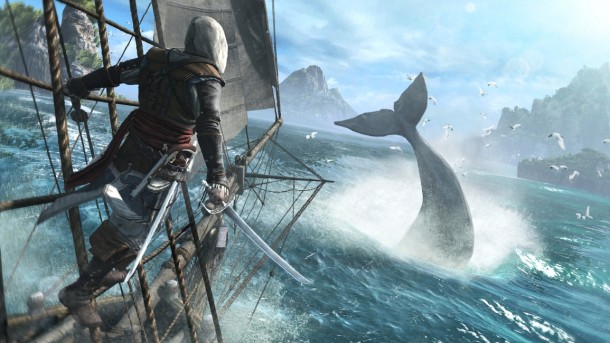 Assassin’s Creed IV: Black Flag has been getting a lot of press lately, and not all of it has been good. Recently released screenshots and information show a new character in pirate garb, hints of the location being in the Caribbean, and of note, the ability to go whaling. One group in particular has taken offense to this. On March 4th, PETA sent a statement to VentureBeat discussing Assassin’s Creed IV and,  more specifically, the whaling that will take place in it:

Whaling—that is, shooting whales with harpoons and leaving them to struggle for an hour or more before they die or are hacked apart while they are still alive—may seem like something out of the history books, but this bloody industry still goes on today in the face of international condemnation, and it’s disgraceful for any game to glorify it. PETA encourages video game companies to create games that celebrate animals—not games that promote hurting and killing them.

History is our playground in Assassin’s Creed. Assassin’s Creed IV: Black Flag is a work of fiction that depicts the real events during the Golden Era of Pirates. We do not condone illegal whaling, just as we don’t condone a pirate lifestyle of poor hygiene, plundering, hijacking ships, and over-the-legal-limit drunken debauchery.

Do you feel that PETA is overreacting? Post your opinion in the comments below.