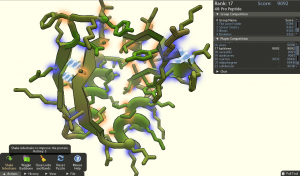 Rosetta@home is a distributed computing project that tries to predict protein–protein docking and designs new proteins with the help of  volunteers who allow their computers to run the Rosetta program when not in use.   But while the program has a lot of computing cycles behind it, it still can’t beat the human mind when you make a game out of it.    Seth Cooper from the University of Washington, redesigned the basic idea behind Rosetta to make the protein folding into a game called foldit. He added leader boards, points, and other competitive aspects.  You can work alone or in teams, and the goal is to find the most stable configuration of the proteins.

Every year a contest is held where the solutions from Rosetta that are almost perfect are used as a starting point for a folding competition.  This year the gamers deduced the correct configuration of a protein belonging to the Mason-Pfizer monkey virus (M-PMV).  It’s very similar to the SIV (Think HIV for Monkeys).

“This is the first instance that we are aware of in which online gamers solved a longstanding scientific problem,” writes Khatib. “These results indi­cate the potential for integrating video games into the real-world scientific process: the ingenuity of game players is a formidable force that, if properly directed, can be used to solve a wide range of scientific problems.”

What the scientist were looking for is a protease.  This virus, like many others, enter the cell as a large block and then need to be “cut” apart before they are able to reproduce and therefore cause the disease to spread.  The protease they were looking for is the one that cuts this virus.  If they know its exact shape they can make drugs that will block the protease and therefore stop the infection cycle.  Thanks to this years contest they have their answer.  And before folks start thinking “who cares if they stop monkey Aids”,  if you can cure the disease in one primate you have a significantly greater chance that you can tweak the treatment to work on other primates.  We could be seeing the first step to eliminating HIV and it’s all thanks to gamers just trying to get a high score.

If you want to play and help out science then head over to the  foldit website.  There are clients for Windows, Mac and Linux.

Thanks to Hanna for pointing this story out to us.