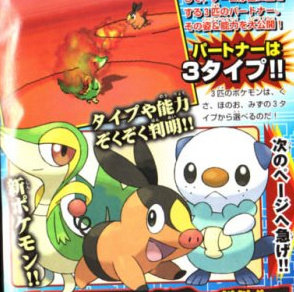 Official Nintendo Magazine has obtained scans of a CoroCoro magazine article featuring the three starter pokémon for the fifth generation titles Pokémon Black and White. While none of the creatures have names yet, an unconfirmed rumor calls them “Tsutaaja, Pokabu, and Mijumaru.” It looks like we will again be seeing a standard fire, water and grass type for the starters. A little more variety would be nice, but it’s hard to blame Game Freak for not changing a winning formula.

There are two new trainers to control this time as you battle through the Ishuu region. The game will feature more 3-dimensional layouts; so, while the starter types may not be changed, they are updating some facets of the game.

No time frame has been set for a North American release, but both Pokémon Black and White are slated for a fall 2010 release in Japan.