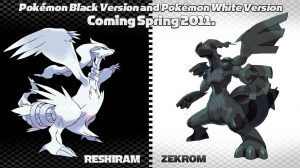 According to Pokémon fansite Serebii.net, a new promotional pamphlet for Pokémon Black and White lists some new features for the fifth generation titles. First, 3DS and DSi players will be able to video chat with fellow pokémon trainers. It’s limited to one-on-one video chat over Wi-Fi, but you will also be able to do 4-way video chat on a wireless LAN. Though, if you’re all on the same LAN, why you would bother with video chat is beyond me.

Also, when your DS is in “pass-by” mode, you will still be able to connect with other trainers who are playing the game. Presumably this is similiar to Dragon Quest IX‘s Tag Mode feature, but the pamphlet does not detail what bonuses you’ll get for connecting. If it is similar to the pokéwalker connections, it will mostly be berries, potions and TMs.

Black and White will also both feature triple battles, and the order of your pokémon will determine the damage sustained by group attacks. There is also a “High Link” feature where you can connect to a central server and offer assistance with missions.

The video chat is a neat idea, but not really necessary. I am intrigued by the “high link” and “pass-by” features, though.