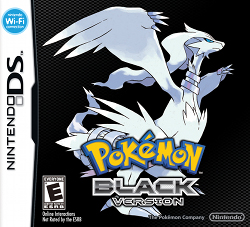 It should come as no surprise to anyone that’s experienced Pokémania first hand, but Pokémon Black and White crushed the previous iteration’s single day sales record. The 1.08 million sales far surpassed Diamond and Pearl‘s 780,000 copies.

Time will tell just how many copies the fifth generation title will sell. Diamond and Pearl ended up selling over 17 million copies worldwide, and Black and White have already moved over 6 million between the U.S. and Japan.

I’ve had the chance to put in some time with the game so far, and so far, they’ve made some great advancements graphically, but the core mechanics are still the same. I certainly wouldn’t be surprised if this ends up breaking the overall Pokémon sales record, but that’s still over 10 million copies away. If you’re still on the fence about whether to pick this one up, we’ll have a review coming out very soon.

“Longtime Pokémon fans are attracted to the new Pokémon, new battle systems and a new region to explore, while newcomers enjoy the ability to jump in and have fun right away,” said Charlie Scibetta, Nintendo of America’s senior director of Corporate Communications. “These sales numbers illustrate the continued strength of the Nintendo DS family of systems. Already established as the nation’s best-selling video game platform of all time, the installed base of more than 47 million makes it the ideal hand-held for developers to reach a huge gaming-focused target audience.”

Pokémon Black Version and Pokémon White Version feature more than 150 new Pokémon for players to catch, train and battle. The never-before-seen Unova region gives players a whole new world to explore. For the first time in the series, in-game environments change with the four seasons. The games also introduce Triple Battles and Rotation Battles, which give players even more choices when battling.

About Nintendo: The worldwide pioneer in the creation of interactive entertainment, Nintendo Co., Ltd., of Kyoto, Japan, manufactures and markets hardware and software for its Wii™ home console and Nintendo DS™ family of portable systems. Since 1983, when it launched the Nintendo Entertainment System™, Nintendo has sold more than 3.5 billion video games and more than 577 million hardware units globally, including the current-generation Wii, Nintendo DS, Nintendo DSi™ and Nintendo DSi XL™, as well as the Game Boy™, Game Boy Advance, Super NES™, Nintendo 64™ and Nintendo GameCube™ systems. It has also created industry icons that have become well-known, household names such as Mario™, Donkey Kong™, Metroid™, Zelda™ and Pokémon™. A wholly owned subsidiary, Nintendo of America Inc., based in Redmond, Wash., serves as headquarters for Nintendo’s operations in the Western Hemisphere. For more information about Nintendo, please visit the company’s website at http://www.nintendo.com.