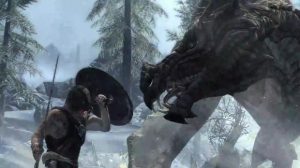 There’s a chance some enterprising fellow (or lady fellow) has discovered some tasty details regarding upcoming Skyrim’s upcoming DLC.

Originally reported by Game Informer, a user on Bethesda’s forums combed through the Patch 1.5.26 update file and found some interesting results.

Among the file names were allusions to snow elves, new vampire feeding animations (that is, vampires feeding on people, not attendants feeding vampires), crossbows, and a mysterious RF designation. Most of the files also contained a DLC01 prefix, lending further credence to their existence.

Could these be the most accurate clues for Skyrim’s DLC yet, or do you think it’s just another weightless rumor? Sound off, folks!