When I first bought my Playstation 3, one of the first games I bought for the system was Demon’s Souls. Released with almost no fanfare or marketing in 2009, favorable reviews and word of mouth ended up turning it into a cult classic, even making its way to the PS3’s “Greatest Hits” collection.  One of the chief aspects of the game that caught the attention of so many gamers was its unforgiving challenge, which made simply completing the game an achievement worthy of sharing. Its spiritual successor, 2011’s Dark Souls, actually embraced this notoriety, focusing its advertising on the phrase “Prepare to Die”. This strategy seems to have worked out for them, as Dark Souls was released to critical praise and has sold over two and a half million copies worldwide. So what is it about this game that has captured people’s attention? With Dark Souls II just a few days away, I’d like to go over a few of the things that I feel have really set its predecessors apart from the pack. 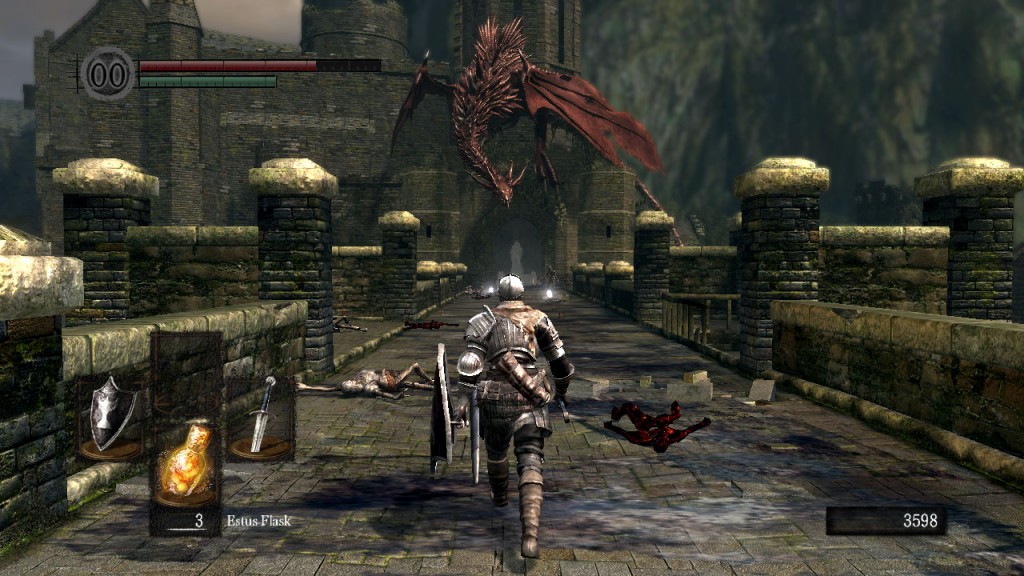 Early on in Dark Souls, you come across a bridge. At the far end, there are a number of enemies. You cautiously advance if the bridge, shield raised, waiting for them to attack you. You then burst into flames, as an enormous dragon swoops down, killing both you and the enemy soldiers. Moments like this define Dark Souls, when the enemies or environment throw something completely unexpected at you. These situations can be difficult and frustrating, but they also serve to highlight an important point: players have to be cautious and alert in order to make progress. The environments in Dark Souls are more than just window dressing; they give observant players clues and direction. A closer examination of the bridge shows charred bodies of previous victims, which warn of the incoming danger to all things flammable. Another example can be seen on the player’s first encounter with the Mimic. While this Eldritch horror seems indistinguishable from an ordinary chest, it is actually possible to tell the two apart by looking at the chain connecting to it. All of this is an approach to design that isn’t seen very often, as most games would rather just give the player glowing objective markers or detailed level maps.

With the near constant threat of death always hanging in the air, players are forced to examination every nook and cranny, which is good, since a lot of the lore and narrative of the game is only told through the environment. Outside of a few brief cutscenes, there is very little “traditional” storytelling in Dark Souls. Instead, From Software again relies on the player to piece things tighter for themselves. Dialogue with characters (all optional, of course), item descriptions, and the state of Lordran itself all combine together to make a surprisingly complex tale. What’s really amazing about the lore of Dark Souls, though, is how it has inspired the fan community. By working together, gathering information and trading theories, they have managed to discover insane amounts of backstory and detail. If you want the cliff notes version, you should really check out the Prepare to Cry Lore videos by VaatiVidya. He has done a great job telling the story of the game and making it entertaining to watch. Seeing all of the little details that I missed on my first play through really made me go back and look at things in a whole new light. 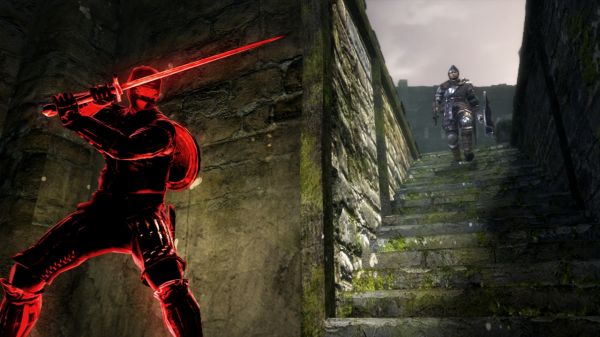 Speaking of the multiplayer community, I think it’s worth mentioning how different the online experience of Dark Souls is, both from other games and from the offline experience. When I first played through the game, I did so without taking part in any of the online features. After all, I had beaten Demon’s Souls by myself, so why not do it with this? After no small amount of effort, I was successful, and I felt accomplished for having made it through. However, after the DLC came out, I started up a new character, decided to put more effort into the cooperative features, and found myself, surprisingly, having a lot more fun. Certainly, part of it was how getting an extra hand made certain frustrating parts more bearable (defeating Smough and Orenstien is a lot easier with a meat shield). Even beyond that, though, the incorporation of multiplayer into the Dark Souls’ single-player just felt like a natural extension of the game. I preferred to work cooperatively with players as a member of the “sunbros” covenant, helping them work through Anor Londo or cut off Seath the Scaleless’ tail. Even in PvP, there was fun to be had. Upon being summoned to another person’s world, I found the host and a red phantom (in other words, an invading player). However, instead of attacking each other, we found ourselves taking turns playing hide-and-seek. Its bizarre moments like this that make Dark Souls’ multiplayer so amusing, even after more than two years. It seems that From Software has taken this lesson to heart, as they have further expanded the multiplayer for Dark Souls II, since now players can be invaded even when not fully human. When asked about it, one of the game’s directors said that he felt that invading “was just part of the experience”. So, if you don’t like PvP in your Dark Souls, I guess you’ll have to either just suck it up or disconnect from the Internet.

Dark Souls remains probably my favorite game for the Playstation 3; it is the only game that I’ve worked up to a Platinum Trophy for. So, as you can imagine, next week’s release of Dark Souls II is something I’m very excited about (if the fact that I wrote an entire article about it didn’t tip you off). For the past month, I’ve been actively avoiding new details about the game, so that I can have as genuine a reaction as possible. From what I saw before I isolated myself, though, it seems that From Software is still committed to the same design choices that made me love the original.