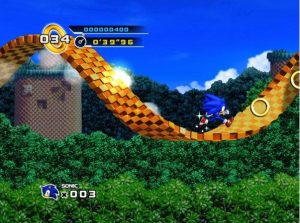 Sega announced via it’s blog today that the secret project Code named “Project Needlemouse” (which had been speculated to be a Sonic Game) is Sonic 4: Episode 1.

As promised, the time is finally here. On February 4th, 2010, after two huge Community challenges and a massive amount of support from our fans, SEGA is proud to unveil the real name behind Project Needlemouse – so we’ll get right to it. As of this moment, it is official – the game’s name will be: Sonic the Hedgehog 4 Episode 1.

Sonic Returns to his 2d scrolling goodness. About Fucking time too. I stopped playing the Sonic series when they switched to 3d. I am definitely putting this on my Gotta Have List. The game will pick up the series after Sonic & Knuckles. The game will also introduce leaderboards to the series (big meh! for me on that point) and will incorporate motion controls on the Wii and PlayStation 3 (with the Sixaxis controller).

Sonic 4 will be released as a download only for WiiWare, Xbox Live Arcade, PSN, and ????. Yes the official Website lists ???? as a release platform. Maybe that Zone 40 Sega is for real?