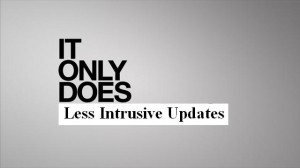 G: “This Sucks lets. Let’s play Pandemic while we wait.”

Well Sony says that they will be making updates “less Intrusive” on the Vita and on future Sony consoles. In an Interview with Game Informer, SCE Worldwide Studios President Shuhei Yoshida had this to say.

“I agree, it’s very annoying when you only have one hour in your busy life to play a game, and when you have to spend 30 minutes out of that one hour to update the hardware.

So it’s not necessarily the frequency of how we update, it’s like you said—intrusiveness—of the current processes that we have on PS3 and PSP. I cannot talk about specific plans, but we are very aware of the issues, and we’d like to address those issues on PS Vita going forward.”

What would be good for any system update (regardless if it’s an Xbox, Wii or PS3), is background downloading and installation.

Sony also announced that the Vita will be capable of Ad-Hoc multiplayer with PSP consoles.  Since the Vita can’t play UMD’s this only applies to games downloaded of PSN.