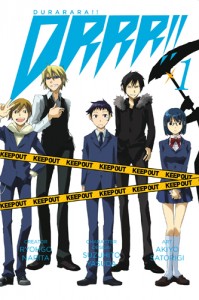 In January 2012, Yen Press brought the first volume of Durarara!! to North America. The manga was created by Ryohgo Narita and is based on his series of light novels, which was also adapted into an anime. Durarara!! is romanized as DRRR!!, as shown on the cover.

The first volume introduces the cast of characters, though we meet most of them only briefly. It also establishes the beginnings of several of their stories, setting the series up for a larger plot involving all of them.

The character we see most is Mikado Ryuugamine, a student who moves to Ikebukuro on his own to attend high school. Ikebukuro, a Tokyo neighborhood, serves as the main setting so far. Mikado made the decision to go to school there at the urging of Masaomi Kida, an old friend who attends the same school. On Mikado’s first day in Ikebukuro, Kida shows him around town, and they catch a glimpse of The Black Rider, a motorcycle driver that supposedly has no head. Rather than being frightened by his brush with the urban legend, Mikado is excited. He hopes that something extraordinary will finally happen to him in his new home. 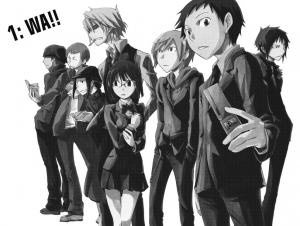 Other characters introduced include the unsettling and dangerous Izaya Orihara; Seiji Yagiri, a high school student with something to hide; and Simon, an Afro-Russian sushi promoter. We may only get the tiniest of glimpses at these individuals, but it is clear from the start that most of them will be important, especially since two of them are on Kida’s list of people to avoid. A mysterious gang known as the Dollars also comes up often, and it will most likely play more of a role later. I recommend reading this volume more than once to get a good grasp of the characters. I had trouble keeping track of everyone on my first pass, but the second time around, I found myself picking up on little hints I hadn’t noticed before. The story moves at a pretty quick pace, jumping between plot lines often, so I also needed to read it again to get a better idea of what was actually happening.

The artist does a brilliant job of bringing the characters to life. Even when they aren’t speaking, their expressions and body language say a lot about what’s going on inside their heads. In addition to showing characters interact in person, DRRR!! makes frequent use of chat room conversations to add to the story. So far, Mikado is the only character whose face is shown with his screen name. However, you can see the hands of whoever is typing in the chat, so it is possible to guess which names belong to other characters we’ve met. I thought this was a nice touch because it shows the characters’ online personas and lets us see if they act differently than they would in real life. Most of the time, the characters seem to get more of the artist’s attention than their surroundings. However, when something takes place at a real landmark, such as Ikebukuro’s Cinema Sunshine, it’s clear that an effort was made to accurately portray the location. Otherwise, I didn’t notice anything remarkable about the setting art, although there were several times when shading and excellent use of shadows helped set the tone for a particular scene.

Another interesting thing about this volume is the amount of pop culture references it makes. In addition to the aforementioned chats, there are references to suicide message boards (websites where strangers coordinate to die together), a complex in Ikebukuro called Sunshine City, headless horsemen, and manga. For example, Kida takes Mikado to a huge manga and anime store that actually exists. There’s a Fullmetal Alchemist sign on the front of the store, and Mikado looks at titles like Shakugan no Shana and Library Wars. One panel even pokes fun at GFantasy, which Anime News Network lists as the company serializing the manga, by having Mikado say he’s never heard of it.

The first volume of DRRR!! isn’t just fun to look at on the inside. The outside illustration makes excellent use of the front and back covers (both inside and outside) as well as the spine to show off all of the characters. The only place on the cover that is shiny is the strip of “Keep Out” tape across the middle, which is used to draw your attention to the description on the back. Also, artist Akiyo Satorigi collaborated with Yana Toboso, the current artist for Black Butler, to make a nifty full-color insert that you can find at the front of the book.

The translation quality seemed pretty standard, though I did find it interesting that they decided to leave certain words untranslated. For example, Seiji refers to his sister as “nee-san,” which means “older sister” in Japanese, when the translators could have replaced it with something like “sis,” “sister,” or her name. I think the instances where words were left untranslated flow well and were probably a good move on the editor’s part.

Even though I did have to read it twice to take in all the information, I had a lot of fun with the first volume of DRRR!! Considering the amount of characters it had to introduce in such a short amount of time, it did a pretty good job keeping things from getting too confusing. Though I don’t feel like I know very much about the overall plot yet, I’m intrigued by the characters and their crazy stories. I look forward to learning more about how these individual tales intertwine in the next volume, which comes out this April.