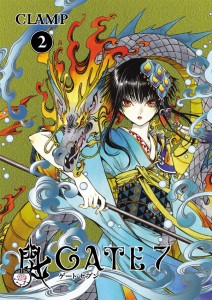 The second volume of CLAMP’s Gate 7 hit stores at the end of last month. Overall, it wasn’t a bad read, but there were a few things that I found disappointing.

The first volume introduced us to the Kyoto-obsessed Chikahito Takamoto, the beautiful Hana, and Hana’s teammates, Tachibana and Sakura. Hana and her friends are embroiled in a mystical war, and Chikahito got caught in the middle of it when he began living with them in Kamishichiken. He appears to be special in some way, but the trio of warriors have yet to figure out why.

As the story continues, more characters are introduced and some information about the reason Hana must fight is revealed. The one in charge of Hana’s group, Hidetsugu Toyotomi, is one of many reincarnated historical figures who can control creatures known as oni. These supernatural beings made blood contracts with humans long ago, and descendants of those humans inherited the contracted oni. Hidetsugu is collecting allies to aid him in a power struggle that is happening amongst those with oni, and that’s why he wants Chikahito, who currently has no affiliation, to join him.

This is one series where it’s actually important to read the translation and historical notes at the end of each book. Unlike Chikahito, I am not a Japanese history buff, so the names of the reincarnated characters didn’t mean much to me until I read the background information. So far, several historical figures have been introduced, including Hidetsugu Toyotomi, Mitsuhide Akechi, Masamune Date, and Iemitsu Tokugawa. Others, such as Nobunaga Oda, are mentioned but not shown, and will likely show up later. Though having present-day versions of these people is intriguing, I found it annoying when a new one would appear because Chikahito became a walking textbook. His convenient love of history made him the mouthpiece for nearly every infodump about which characters are connected in some way and how much is known about their backgrounds. I really don’t know how else the writers could have handled that information, but I just hope Chikahito has opportunities to do more than spout historical trivia in future volumes.

With all of the new characters introduced in this volume, there wasn’t much room for developing the ones we met in the first book. Though we learn some more about Hana’s elemental powers and why certain characters are involved in the war, we aren’t given much new information about anyone. Hana still loves noodles, Tachibana is still moody, and Sakura is as easy going as ever. At least Chikahito seems less scared of battles now than he was previously. I know it’s early in the series, but I feel like everyone could have been fleshed out a little more.

The art is, once again, gorgeous. All the detail and pretty character designs established in the previous book carry over into this volume. Shadow and light balance set the tone well, depending on how serious or humorous a scene is meant to be. The battles tend to have a lot going on, but they aren’t hard to follow. This volume also ties itself to other entries in the CLAMP universe with some Piffle Princess products drawn in a few panels. (The Piffle Princess company appears in Angelic Layer, Cardcaptor Sakura, Tsubasa: RESERVoir CHRoNiCLE, and several other CLAMP works.)

I had fun with this volume, but the lack of character development and the fact that Chikahito’s usefulness was limited to historical lectures left me less than satisfied. I still like the story, and I’ll definitely pick up the next book. However, this continuation of Gate 7 doesn’t quite live up to the potential I saw in the first volume.