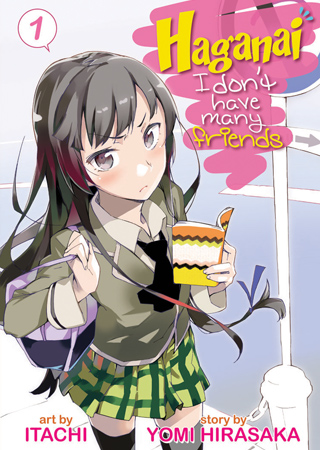 Haganai: I Don’t Have Many Friends (Boku wa Tomodachi ga Sukunai in Japanese) is a manga based on a light novel series of the same name by Yomi Hirasaka. It follows the Neighbors Club, a group of socially inept students at St. Chronica’s Academy, on their mission to make friends despite their faults. Three volumes of Haganai have currently been released in the United States, and this review covers them all. So, does this comedic tale of high school friendship tale deserve a place on your shelf, or would it just get picked last for the dodgeball team?

First off, let’s meet the misfit members of the Neighbors Club. The point-of-view character is Kodaka, a relatively normal guy with blondish hair and fierce eyes; unfortunately, his looks make everyone think he’s a thug. Yozora is a sarcastic girl with so few good points beyond her looks that her only pal is an “air friend.” Sena is a gorgeous blonde who likes dating sims; her ego and terrible attitude often land her in hot water. Then there’s Yukimura, a shy, pretty boy who aspires to be true man. He decides to learn the way of the thug from Kodaka. Kobato, Kodaka’s little sister, is a middle school kid pretending to be an ancient vampire. Rika is a perverted science prodigy who’s into some seriously nerdy slash fanfic. Finally, we have Maria, their faculty advisor, who happens to be a 10-year-old genius nun and likes dirty words.

None of these unfortunate souls had any friends when the story began, and they’re still friendless now. It actually took all three volumes to introduce the main cast, so the story hasn’t had time to develop the group dynamic much beyond everyone’s initial impressions of each other. At the beginning of the first volume, Kodaka catches Yozora hanging out with her “air friend,” and the two form the Neighbors Club to find real people to talk to. Their first new member is Sena, who decides to join the club after seeing Yozora’s clever recruitment poster in the hallway. Soon, one awkward situation after another draws in the rest of the main cast. 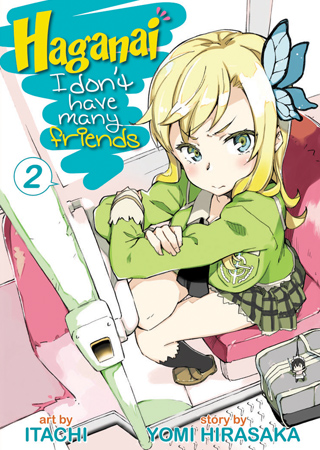 So far, the Neighbors Club members have met every week to try new social activities (like playing video games or putting on plays) and improve their interpersonal skills, but they barely manage to coexist. A couple of rivalries have blossomed in full force, but that’s left a few characters off to the sidelines for now. There have been a couple of hints at a deeper plot, including a tease that one club member might know Kodaka from somewhere else, but otherwise, the story hasn’t moved much. Fortunately, there have been plenty of shenanigans and hilarious situations during meetings to make up for it. (There’s also a lot sexual humor, so if that’s not your style, you probably won’t like some of the jokes.)

As amusing as Haganai is, I would still like to learn more about these kids and see them start to form some friendships in the next few volumes. We already know that Kodaka made a friend a long time ago, so surely he can do so again. Also, the academy setting is getting a little bland, so hopefully the story will include more arcs that take place somewhere else and expose the characters to new situations. While I’m making a wish list, I really hope the characters develop beyond their outrageous personalities. I know these kids are supposed to be outcasts, but as a reader, I’d like to find them all endearing for more than awkwardness. Their actions are so predictably weird sometimes that the only character I sincerely care about is Kodaka, who helps Haganai cling to sanity by its fingernails.

The series’ art, drawn by Itachi, is pretty good but not amazing. The characters are always highly expressive, but the backgrounds rarely get any attention, and a lot of the line art isn’t as crisp as it could be. The front cover art has all been pleasing so far; each features a different girl from the cast, and it looks like the back of Kodaka’s head appears on volume three. Maybe the next one will actually show someone smiling, though. The back covers are amusing in their own right, showing off funny bits of art styled after pop culture icons like the Powerpuff Girls or Lego. 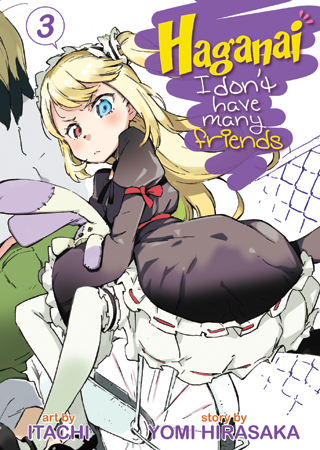 If you’re worried about how these volumes will look on display, they are a bit shorter than most English-language manga releases, so they’ll break the rhythm of a well-stocked manga shelf. The covers are nice and glossy, though, and each volume also includes a full-color, glossy art insert at the front.

Overall, the first three volumes of Haganai have been fun. The plot isn’t fast-paced, but there’s plenty of humor to fill in the panels, and that’s fine by me. It’s not the prettiest manga out there, but the art gets the job done, and you can always tell what the characters are feeling at any given moment. If off-color humor is your thing and you’re not looking for a series that requires too much thought, Haganai should probably be on your list. I’m looking forward to seeing the characters find some BFFs one day, and I know I can trust their hijinks to keep me entertained along the way.