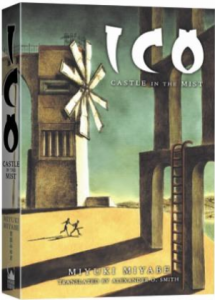 Ico: Castle in the Mist is a novel based on the hit ICO for the PS2 (soon to be re-released in HD on PS3). Now I know what you’re thinking: “A book based on a video game? That’ll be about as good as a movie based on a video game.” I hope that’s not your thought, but if it is, this book will change your mind. Written by Miyuki Miyabe and translated by Alexander O. Smith, Ico: Castle in the Mist should be held up as the poster child for how the story of one medium should be translated to another.

Now before I go into the story, there are only minor spoilers ahead. The novel is not a scene for scene retelling of the game. It is possible to read the book  or play the game without spoiling your enjoyment of the other.

The story follows two main protagonists, Ico and Yorda. Ico is a boy with a destiny. He is born with horns growing from his head marking him as the “sacrifice,” and on his 13th birthday he is taken to the Castle in the Mist. There he is bound and left in a sarcophagus to be given as an offering to the master of the castle to ensure the prosperity of the rest of the world. Breaking free of his bonds, he finds a young girl (Yorda) in a cage of her own. Unable to communicate with her and under attack from living shadows, Ico makes it his mission to get both of them back to safety.

The story switches mainly between events as seen from Ico’s and Yorda’s perspective, although there are a few points where you follow some minor characters. Miyabe uses this transition to paint a differing yet shared view of this fantasy world. The alternating protagonist role creates a Yin-Yang balance throughout the novel. Ico and Yorda are both born into positions of duty. They both are given great respect based on those roles, but like a queen ant or bee, their role is considered more important than their individual desires. Their wants, their needs are irrelevant to the needs of the many. The upbringing that each receives due to this brings about the first such way that their similar attributes lead to differing views of the world.

Ico grows up in a small farming village on the outskirts of the kingdom. There he is groomed to be a protector. Not in the sense of a knight, gallantly riding into battle fighting of the invading army, but in the “One for All” sense of the Musketeers. During his upbringing, he is shown the great devastation that has been brought upon the land by the master of the castle so that he will voluntarily sacrifice himself for the good of everyone else. Like a good worker ant, he accepts without question his role to die for the colony. Upon being brought to the castle and freeing himself from his bonds, he doesn’t think twice to put himself in harm’s way to protect Yorda.

Yorda, on the other hand, is a princess. While many believe, as Mel Brooks said, “It’s good to be the King,” nothing can be further from the truth. As royalty, Yorda had no control over her life: She is groomed to be the next leader of the land. She will study what her advisers tell her to study. She will attend the functions she is told to attend. Her needs are insignificant to the needs of the kingdom. Because of this, she becomes very weak and subservient, but she still has a strong sense of protection. She will endure this life for the good of the kingdom.

Together they are two sides of the same coin.

To relate their stories to the reader, Miyabe uses direct knowledge and flashbacks. We learn of Ico and his pains in “real-time”, so to speak. The reader sees the world through Ico’s eyes, feels his pain, hears his thoughts. For Yorda, the reader will see her story in flashbacks. At certain points in the story, Ico will enter a trance-like state and see the world as it was in the past through Yorda’s eyes. While Ico’s story focuses on more “manly” elements such as combat and the male drive to be a protector, Yorda’s story is stereotypically “feminine” and focused on feelings and relationships. Miyabe continues the Yin-Yang balance as she blends these two elements without letting either side overpower the story.

Miyabe also hits a good balance in her descriptions of the land.  We are given a fair amount of details on the lay of the land, the layout of the castle, even the styling of the armaments worn by some of the warriors, but not so many details that the story gets bogged down.   The rest of the details are easily added by your own imagination.   The minor and major characters feel and act like real people.  While you may not have made the same choices, you can see why a person with that particular personality would.

I have to say, Alexander O. Smith did a great job with the translation.  I’ve seen some translated books that do a word for word translation, and while that sounds like what you should do, it really isn’t.  Some phrases and body gestures only make sense in the original language. The translation staff will need to change some wording but retain the spirit of the original text.  Thankfully, the Mr. Smith understands this.  There were no instances of out-of-order wording (Think “All your base are belong to us.”) nor were there any turns of phrase that wouldn’t make sense to the American reader.

Due to the balance that she brings to her writing Ico: Castle in the Mist will be enjoyable to readers as diverse as fans of Starship Troopers and Little Women.

A definite Read It.

Disclosure: This book was reviewed using a copy sent from Viz Media.