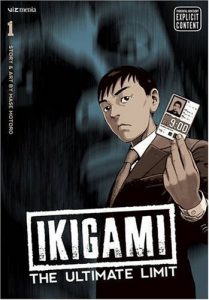 Thank you for your loyalty. You’ve no doubt noticed that the world is a troubled place. People are apathetic, lazy, unmotivated. You’ve probably asked yourself

WHY ISN’T ANYTHING BEING DONE TO STOP THIS SYSTEMATIC DECLINE?

Rest assured that measures are being taken. Beginning today, we will randomly select a different citizen who will be killed within 24 hours of notification. We believe this will help remind all people how precious life is and how important it is to be a productive, active member of society.

Thank you for your continued attention and your cooperation and participation…

So begins the story of Kengo Fujimoto, who has just begun his job at the Ministry of Welfare and Health. In this dystopian version of Japan, a national prosperity law has been passed. The government believes that the threat of imminent death will encourage people to appreciate life and to discourage “anti-social” behavior, and so, citizens between the age of 18-24 are randomly selected to die. The selected citizens are given 24 hours notice of their death and it is Kengo’s job to deliver a death notice called an “Ikigami.” (literally translates to “God of Life”. Thanks Dan!)

So, how are the unlucky chosen? On the first day of grade 1, when the children receive their normal childhood vaccinations, 1 in 1000 vaccines contain a nanocapsule. This capsule will stick to the heart and an internal timer will cause the capsule to explode at a precise date and time in the future killing the citizen. After death, the next of kin receives a large bereavement payment. This payment is conditional. The soon to be deceased must not commit any crimes or other “anti-social” behavior in the 24 hrs after receiving the ikigami. If this rule is broken then the next of kin gets no payment and will be held criminally and civilly responsible for the crimes of the deceased.

There is one other way to receive a nanocapsule. “Social Miscreants” will be purposefully injected with a capsule. The surest way to receive a capsule is to speak out against the Ministry of Welfare and Health’s immunization program, but it is implied that many crimes are punished by capsule injection. It is not revealed how long a timer the “Social Miscreants” will receive.

The manga follows 3 stories. The main story is that of Kengo as he wrestles with his conscious over the morality of the program, which only gets worse as he learns the insider knowledge of how the program works. His manager, Section Chief Ishii, is introduced as a mentor and devil’s advocate for the program. Both must be very careful about what is said out loud, as questioning the government is “anti-social” behavior which is punished by purposeful injection of the nanocapsule into the perpetrator. So, much of Kengo’s story is internal dialogue. As this is the first volume, there has not been a lot of character development, and it is unclear if Kengo will come to agree with the program, disagree internally, or risk his life by disagreeing publicly.

The second and third stories follow 2 ikagami recipients. How each one reacts to the news is used as a point of argument between Kengo and Ishii. Yosuke Kamoi is a high school drop out. He was tortured by the bullies at school and never really recovered from the abuse. He uses his last 24 hours to track down the bullies and make them feel the humiliation he felt. The second follows an aspiring musician, Torio Tanabe. He was discovered by a talent agency while busking with his best friend, but the talent agent only wanted him. He chooses the possibility of fame over his friendship only to end up a back-up singer.

The story is well written and the visuals bring out the emotion of the moment drawing you in to that characters shoes. You feel the powerlessness and rage of the bullied. You see the heartfelt loss that the musician feels at losing his best friend. The short but concise dialogue between Kengo and his manager makes you question if the government is truly evil or have they really found the only way to convince people to truly appreciate life. I love stories with no clear cut, black/white answers to tough questions. It forces you to question your own beliefs as you look through another’s eyes. I can’t wait to get to Volume 2.