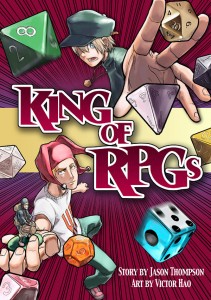 Story:
Shesh Maccabee has a problem: He is addicted to World of Warfare, a computer RPG. After a full week in an internet cafe with no food or water, Shesh collapses. Fast forward a few months, Shesh is out of rehab for his gaming addiction and has just started college with his high school friend Mike. Looking for something to do, a dorm mate invites Shesh and Mike to a meeting of the Gaming Club where they meet Theodore Dudek. Theodore is running a game of Mages & Monsters. He wants to be the ultimate game master, and he’s looking for the ultimate role player. During the campaign, Shesh and his friends discover that his therapy didn’t break him of his gaming addiction; it only buried it deep in his subconscious, where it festered and grew. Now he suffers from a split personality. Shesh becomes his character in the most literal sense, and he refuses to lose! Theodore has found his ultimate player… If he can only help Shesh to control the gamer within.

The pacing of the story is not too fast, not to slow. You’ll need a good knowledge of RPGs, D&D, collectible card games, Renaissance Faires, 20-sided dice, LARPing and gaming culture in general to understand the subtle jokes and references used. And trust me there are very few panels that don’t include some gaming culture reference. Two of the chapters revolve around the local Comics & Games store, including a “fight” over who will be “Alpha” of the gaming community.

Characters:
Being a gamer myself, I found it almost nostalgic to read as I used to be very much like Mike. Interested in video games and table-top RPGs, kinda awkward around the ladies (I got better), and friends with people who took their gaming waaaaaayyyyyyy to seriously. (I gamed with folks who thought they could do real magic and one who thought he was a werewolf. No I’m not joking) If you were a gamer in college, or are a regular at your comics and games store, you’re likely to identify with at least one of the characters. All the characters felt very real to me, as if the writer was basing his characters off of people he really knows. Which he just might have been. 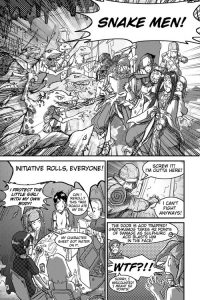 Art:
The art style looks simple but hides little details that complete the scene. Shadows and shading consider the light source. All of the main characters and even most of the folks just standing in the background are given unique clothes, faces, and personalities; only the cops are really given a generic feel. The only complaint I have is that I feel that action lines were a bit overused (See the picture to the right).

Quality:
The book is your run of the mill Trade Paperback. It’s printed on a middle quality paper stock – not the best, not the worst. The paper is thick enough that the ink doesn’t rub off on your fingers. Can’t really ask for much more without it being a Collectors Edition. There are a few 2 page panels that don’t line up correctly but it’s by such a small margin that you shouldn’t notice unless your specifically looking for it.

Overall it was quite a fun read, well worth it’s asking price and I can’t wait for the next volume.

Yeah, they made a trailer for a Graphic Novel. I didn’t know they did that either. Check it out.