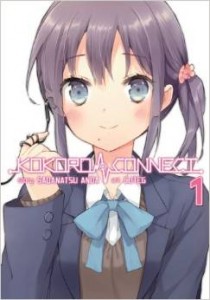 It’s hard to believe that it’s been almost two years since I reviewed the Kokoro Connect simulcast on Crunchyroll, but now Seven Seas has debuted the manga adaptation here in North America. I was a big fan of the anime series, so I had to see how they would portray all of the body-swapping antics without the aid of animation and voice.

If you haven’t read Sadanatsu Anda’s original light novels or watched the anime series yet (For shame!), Kokoro Connect follows five students at Yamaboshi Academy. Each of the five had aspirations of creating their own club that never came to fruition, and all ended up together in the Student Cultural Society–StuCS, for short. Just like the show and novel series, the manga starts off with the Hito Random arc, where the five characters all swap bodies with each other at the whim of a being known as “Heartseed.” The two guys–Yoshifumi Aoki and Taichi Yaegashi–and three girls–Iori Nagase, Himeko Inaba, and Yui Kiriyama–have to deal with all the repercussions of body-exchanging that one might imagine. The characters’ worries are one of the main sources of humor and drama in the first volume, whether taking tests for each other, paying attention in class (or not), and of course, going to the bathroom in someone else’s body. Because high school isn’t stressful enough already.

The story’s pacing is done well, if not a little brisk, punctuated with the aforementioned humor at the right times. But Kokoro Connect isn’t all comedy; volume one introduces snippets of the fears and darker sides of the five StuCS members that are enough to keep you reading and wondering what the next reveal will be.This mixture of humor and drama helps keep the members from feeling two-dimensional (despite being drawn on paper) and definitely ratchets up the tension for what lies ahead. There is fair amount of information about each of the characters, with Yui and Taichi getting the most development overall, despite the other StuCS members getting plenty of spotlight time. But that disparity in level of character development is likely to even out as the series progresses. 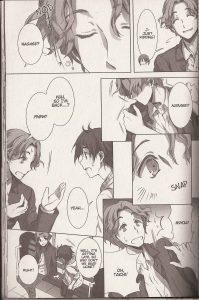 There’s only one complaint that I have about the visuals in Kokoro Connect: some of the panels just feel too empty. Frequently there are panels where there are just one or two characters without any backgrounds, tables, or tones to fill in some of the excess white space. It’s not a consistent problem, as there are pages upon pages with plenty of detail, but every once in a while it’s like the characters get pulled into an empty dimension inhabited only by dialogue bubbles.

Outside of that, the character designs look great and match up with what I expected after watching the anime, though Mr. Gotoh doesn’t look quite as scruffy and ragged in a lot of the manga panels. The rest of the characters show a bit more emotion and detail than their anime counterparts, especially on close-ups, and the features seems softened up a little for an overall cuter feel.

The book is well put-together, except that it lacks both page numbers and a table of contents, despite being divided into chapters. So, if you’re not the type to finish a volume in one sitting, make sure you keep a bookmark handy. However, given that I only have a couple of gripes about this first volume, and they’re not huge issues, there’s really no reason not to pick it up. I know I’m looking forward to the rest of the series.