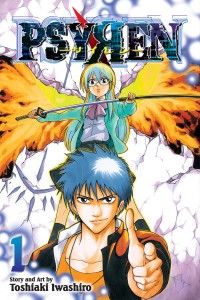 PSYREN follows the story of Ageha Yoshina.  He’s a hired fist for the bullied: for 10,000 yen, he’ll beat up the bully that’s bothering you.  His friends say that he’s only using the money as an excuse; he just likes to fight.  Maybe that’s why PSYREN found him.  While walking home one day, he passes by a public telephone (they still have those in Japan?) that is ringing.  After he picks it up he hears a little girl say “Seven days”…wait, wrong Japanese story. The line has no one on it, but as he picks up the phone he sees a brief flash of what looks to me like a Guillermo del Toro Attack Clown.

The attack clown then leaves a phone card with the word PSYREN written on it.  The next day at school, Ageha finds a PSYREN card in his childhood friend Sakurako Amamiya’s purse.  When he confronts her about it, she first blows him off, then she disappears into thin air but not before whispering the words “Save me.”  Ageha then tries to dig up more information about PSYREN.  He gets conflicting information about PSYREN being a person or a secret organization.  Either way Ageha decides to use the phone card in hopes of finding Sakurako.  A series of events from this point eventually leads to him being pulled to an alien wasteland full of Frankenstein style monsters and centipedes with human faces.  Now he must find out where he is and how to get home.

I found the story pacing to be rushed up to the point that Ageha enters the wasteland.  No time was spent on trying to build the character backgrounds or personalities.  It reminded me of my days playing D&D style games where the GM really didn’t want to do everyone’s back story explaining why they are about to join this adventure. The GM just wanted to jump right into the party campaign.  Some characters are briefly introduced but I get the feeling that they may become important later, but are simply ignored  for now.  Is Iwasha employing Chekhov’s Gun?

Once the characters enter the wasteland, the pacing slows down while the action increases.  Despite how that reads, it’s not a contradiction.  Iwasha spends more time on each event whether it’s an action or dialogue scene.  In the dialogue scenes Iwasha introduces characters that have also been brought to the wasteland and reunites Ageha with Sakurako.  The characters are given the time to start building a personality and a motivation for their actions (well at least those that survive the wasteland).  Now that we have an adventuring party, the action sequences pick up and last longer than a cell or two as the group fights the monsters of the area.

Toshiaki Iwasha uses a lot of sound effects.  Being as this is printed material those sound effects come in the form of “WHOOSH,” “KREKKK,” “HAK KOFF HAK,” and other sound words you might have seen in the Adam West Batman TV series.  Unlike the Batman series, the effects in PSYREN are mostly written in a way that they don’t over shadow the action they are associated with.  The sound effects allow the world to come alive as you use these cues to imagine the sounds in your imagination.

As for the graphics, they are clean and crisp.  Iwasha has hit a nice balance between use of shading and action lines to allow for movement to be shown without causing the pages to be essentially blackened over (See any Biomega volume for an example of overuse of shading).  Iwasha also adds a a lot of emotion and feeling to the faces of his characters. Anger, fear, confusion all stand out so you don’t need to read the dialogue to know what mood the characters are in.  The monsters don’t talk much, it’s mostly roars if they vocalize at all, but Iwasha’s use of action lines, framing, and the angle we see the action make the monsters more than just background.

Where the story will go is a mystery for now.  Iwasha has chosen to reveal the workings of this world as Ageha experiences it.  Although the teaser of volume 2 at the end of the graphic novel reveals that who or what PSYREN is will be explained soon.  As it stands now, the story has potential, if you overlook the pacing issue at the start of the story and the slow character development.

Disclosure: This series was screened using a review copy sent from Viz Media.