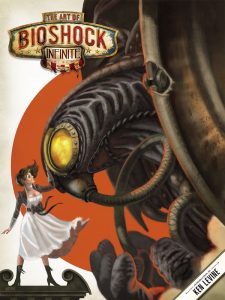 Bioshock: Infinite came out last month to much acclaim for its story line, its interpretation on fear and horror, and for its art. Columbia is rendered throughout the game in bright sunrise colors and heavenlike tones which emphasize both the beauty and the horror of the flying city. So what better way to display the art than an art book?

The Art of Bioshock: Infinite is intensely detailed, ranging from a literal top to bottom look at Columbia’s buildings that display the social strata of the city to a lovingly detailed picture of the horrific effects of Elizabeth’s tears on organic matter (Look ma, no hands! Or eyes…). A whole chapter is dedicated to explaining the propaganda that both warring factions of the game use against each other and their basis in old WWI and WWII recruitment posters.

Another section explains the Colonial era obsession with the supernatural and how that was worked in to be a major part of the game. There’s more on Elizabeth than on Booker, with roughly twenty pages dedicated to different dress and hair styles, facial structures, and how years of confinement and isolation have had an effect on her psyche, topped with some lovely concept art. Booker only gets five pages in comparison, but then again, not much variation can really be offered on the same square-jawed stock character. The best of the art goes to the section dedicated to the effects of Elizabeth’s tears on people. Large color photos of people with two noses or three mouths grace the pages of the book, and a paramount piece displays a man with a younger version of himself growing out of his face. The evolution of the game from 1920s noir style to a colonial style is clearly documented and referenced repeatedly throughout the book, with the gradual transition explained and documented.

Fans don’t have to really worry about spoilers in the book if they’ve read  Bioshock Infinite: Mind in Revolt, but there is one part within Daisy Fitzroy’s chapter that reveals a bit more of her and the Vox’s dark purpose, along with some information on the Boys of Silence. Overall, the book doesn’t really get into the story; there are a couple pictures that give away background, but fans have probably learned more about the game from the trailers. This may seem like a good thing at first, but it leaves gaps of information. For example, all we really get of the Handymen are a couple pieces of concept art and a few notes referring to them as tragic figures of Columbia.  We get even less on the rest of the major fighters in the game such as the Siren or the Songbird, and the minor mooks are barely footnotes in the book except for a few pages on clothing design for the Vox Populi and Founders factions. Fans of the game who are looking for in depth material will not find it here. The book is informative in other ways, though.In a special section on enemies and fighting, the book gives out tips on how to approach these characters in the game, what specific attack types they have, and how to dispatch them.

The Art of Bioshock: Infinite is informative in some parts while incomplete in others. It’s not very surprising, considering that this is an art book, but it was easy to feel lost amid the concept art and information with small paragraphs in the margins to help out. There are some minor spoilers, but nothing in the artbook will really ruin the game unless players are the types who really dig into details. For the thematically oriented, the book is a treasure trove ranging from concepts to two page spreads determined to display Bioshock: Infinite from every part. The evolution of the game will appeal to technical minded fans, and the full art spreads are pretty enough to pull out of the book and frame on the wall. Anyone wanting to learn more about the world of the game intensively won’t find much here. There is some background on certain character types that are used and there is the development of the game’s unique art style, but the book never really gets into the plot or explains major details. Fans looking for something pretty that has a couple interesting tidbits on the game will enjoy, anyone wanting in depth knowledge of the game itself might want to look somewhere else.