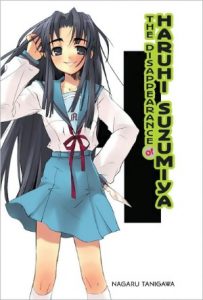 The Disappearance of Haruhi Suzumiya is the fourth novel in the Haruhi Suzumiya series written by Nagaru Tanigawa and illustrated by Noizi Ito. While the previous novel in the series, The Boredom of Haruhi Suzumiya, was a compilation of short stories, this volume is one full-length story with a few drawings interspersed among the pages. While it’s certainly possible to pick up the series with this book and enjoy it, I would highly recommend starting from the beginning with The Melancholy of Haruhi Suzumiya to get the full importance of all the characters and references in the story.

For the uninitiated, the Haruhi Suzumiya series is about a group of high school students that have been dragged together by Haruhi Suzumiya to create the SOS Brigade. Their mission is to help Haruhi discover supernatural phenomena, meet aliens, time travelers or just do whatever she comes up with that day. What Haruhi doesn’t know is that she’s already collected a time traveler, an alien and an esper amongst her ranks, all of whom are there to keep an eye on her because they all believe that she has the power to bend the world to her whims without really trying. The only normal human being among them is the protagonist Kyon, a pretty typical high school student apart from the fact that he willingly hangs out with someone like Haruhi.

While Kyon is technically the main character of all of the stories, he usually shares the spotlight with his high school classmate Haruhi Suzumiya. But, as the name of this book suggests, Haruhi isn’t around for much of the story. The story of The Disappearance of Haruhi Suzumiya takes place just before Christmas time. At the start of the book, the members of the SOS brigade are planning a party (or rather Haruhi mandates that everyone attend), and once the matter is settled, everyone goes their separate ways. The next day, Kyon, your average cynical teenager, wakes up in a world where everything has changed: the SOS Brigade doesn’t exist, the other members don’t even recognize him anymore, an entire class is missing from his grade, and Haruhi Suzumiya is nowhere to be found. Everyone else in his class is blind to the changes and think Kyon has gone crazy; so, he alone must try to find the way to fix the world and reconnect with the reality that he knows.

It’s really quite difficult to say much more about the book without spoiling the plot, but believe me when I say that the story will capture your attention. I simply could not put the book down. Literally. I read all 180 pages in one night while laying in bed. The translation is very well done and the writing flows quite well. Even the ending, while it bring closure to the story, will still keep you wondering just what really happened. It’s easy to see why the feature-film anime adaptation released earlier this year in Japan was such a smash hit, even after the second season of the TV series was less than stellar.

There isn’t much in the way of extras to speak of. The hardcover novel features a handful of black and white illustrations to supplement the story plus eight pages of color illustrations after the story. The Disappearance of Haruhi Suzumiya is an absolute must read for fans of the series. I hope that the rest of the novels in the series can keep up with this one.