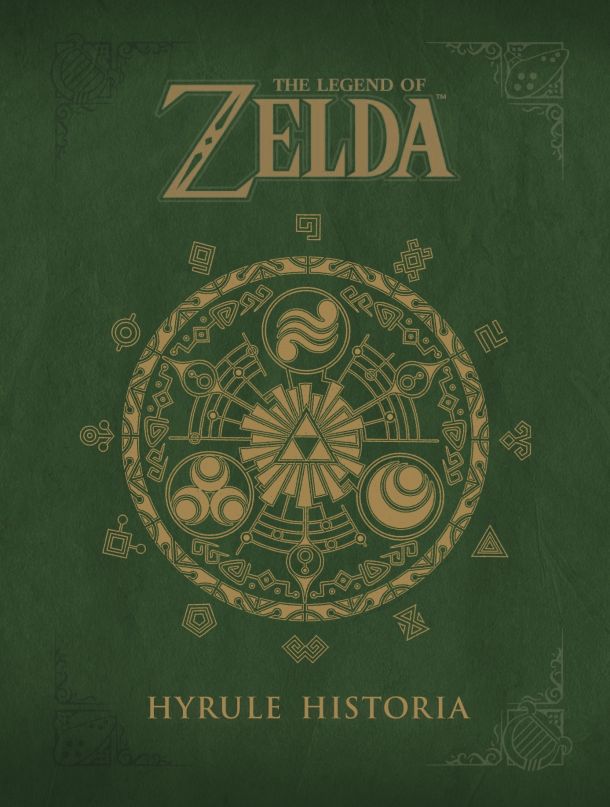 First released in 1986, The Legend of Zelda was an amazing achievement; being the first game to offer a rewritable save file, Zelda allowed players to explore a massive open world at their leisure for the first time. Since then, the series has seen 16 official titles and sold around 70 million games worldwide. As part of the celebration of the franchise’s 25th Anniversary, Nintendo announced that they would be releasing an art book chronicling the entire history of Zelda. Releasing on January 29th, The Legend of Zelda: Hyrule Historia also marks the first time that Nintendo has released an official artbook for any of their properties.  Hyrule Historia is divided into three main sections: an in-depth look at the most recent game, Skyward Sword, a complete timeline of the entire Zelda franchise, and selections of artwork from the rest of the series. As a special bonus, at the end of the book there is an exclusive Skyward Sword comic, drawn by Akira Himekawa, the team that has been writing Zelda comics since Ocarina of Time.

Released in late 2011, Skyward Sword is the first game in the series, canonically. It’s appropriate, then, that the first portion of Hyrule Historia, titled “The Legend Begins,” focuses exclusively on that game. This section covers all of the characters, enemies, and settings that appear in the game.  Between the massive amount of concept art and the messages from the developers, readers are given an in-depth look at all of the work that went into crafting the Wii game. It’s very cool getting a chance to see how some of the main characters evolved, and see the alternative designs that might have been. The various sketches of Fi, your helper character, are especially amusing; her designs run the gambit from blade-armed monsters to hooded ninjas. This section also answers some of the questions that you might have had about different choices that were made in the game development. Why does Link always sleep through the opening of the game? Why does Faron Woods get flooded at one point in the game? Why are the Gorons the only race from other games to appear in Skyward Sword? The answers to all of these questions, and more, can be found in “The Legend Begins.” Sadly, there is one question I had that didn’t get addressed: Why do the cat creatures attack you at night? 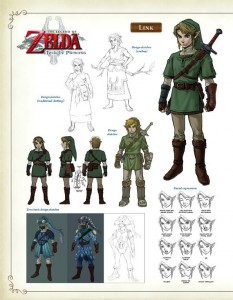 For years, Nintendo denied the existence of an overarching timeline for the Zelda franchise. When asked about it, their representatives would give vague, broad answers that clarified nothing. Fans all over the world were not satisfied with this stance, and they set out to piece to together the order in which the games should go. A quick search across the internet reveals tons of fan theories (and yes, fan theories are measured in tons), but they had to remain just that; theories. Fast-forward to the announcement of Hyrule Historia; one of the things that grabbed the public’s attention the most was the reveal that yes, there was a timeline, and it will be in the book. Let me be the first to say, it’s real, it’s massive, and it’s exhaustive. Covering every major game for consoles and handhelds, “The History of Hyrule”  fits all of the main events together into a cohesive narrative. While the timeline was still uncertain, many of the most popular theories involved a split that occurred at the end of Ocarina of Time; Link is sent back in time to relive is childhood, while the future he left behind continues, as well. This theory is officially confirmed, but Nintendo adds a third outcome to that split; Ganon defeats Link, and takes control of the Triforce. I must admit, that revelation caught me by surprise, but it helps to incorporate some of the games that had been difficult to place before. Overall, “The History of Hyrule” is a very cool section that will appeal to any fan of the series.

Nintendo, as a company, has a tendency to play things close to the chest. They rarely give the public glimpses of what goes on behind the scenes in their game studios. It’s for this reason that Hyrule Historia is so exciting. The third section of the book, “Creative Footprints,” shows selections of art, both official and conceptual, from all of the major Zelda titles. Most of this has never been seen by the public, and the opportunity to take a closer look at the creative process behind the franchise made my inner fan-boy very excited. Probably the coolest bit, in my opinion, comes from the original Legend of Zelda for the NES. Hyrule Historia has copies of the original designs of items, enemies, and dungeons, drawn together on graph paper. The later games have more material than earlier ones, probably due to the difficulty of sifting through old records and storage, but they are all welcome additions to the book. “Creative Footprints” allows readers to witness the evolution of characters and ideas, not just from within a single game, but throughout the entire franchise. Plus, in the Spirit Tracks section there is art depicting the most horrifying train to, thankfully, be cut from the finished product: the Tingle Train.

As a special treat, the final thirty-odd pages of Hyrule Historia contain a comic by Akira Himekawa, depicting events leading up to the opening of Skyward Sword. The creators of Zelda comics since 1999, the pair of artists that make up the group have a way with capturing the spirit of the games, while at the same time adding in more narrative aspects to spice up the story. Fans of anime and manga will love their art style, which is very detailed and expressive. Only the first third of the comic is in color, which is a shame, since it makes the black and white pages seem bland by comparison. Otherwise, the comic is a great addition to an already amazing book. 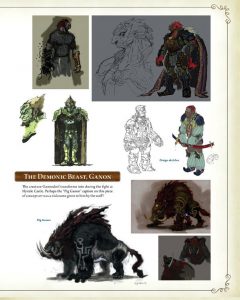 Hyrule Historia is bookended by messages from two of the most influential men in the series: Shigeru Miyamoto, the series creator, and Eiji Aonuma, current series producer. In their letters, the two men detail the challenges they’ve faced while working on the series, and their hopes for the future of the franchise. Their messages set an appropriate tone for what is, basically, a love letter to all fans of Zelda worldwide. Overall, I can’t recommend this book enough. The amount of content and level of detail far outstrip anything that Nintendo has ever released before, and it offers a rare look at the creative processes that go into making games. It also acts as an international peace-keeper, settling the argument about series continuity once and for all. To anyone with an even passing interest in The Legend of Zelda, there is no reason not to buy this book. Hyrule Historia perfectly chronicles and celebrates the evolution of one of the most beloved franchise in the world, and is an amazing book in its own right.

Disclaimer: For this  review, The G.A.M.E.S. Blog was provided with an advanced pdf from Dark Horse