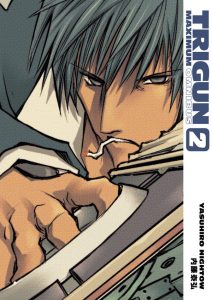 Vash and the gang are back in an action packed second volume! The second book is filled with fights, exposition and back story, but does the story’s change of pace add to the series or detract from it? Well read on and find out!

The first volume of Trigun gets off to a rather slow start, but this is to be expected. It was setting up the audience with both character and plot introductions, creating the unanswered questions that leave an audience wanting more. Trigun Omnibus Volume 1 does this pretty well despite the poor pacing at times, which deeply contrasts the pacing of the second volume. There is a lot going on in this one and at great speed, too.  Because of the high speed and jumping into flashbacks, it can get confusing as to what is happening within the plot, which can quickly shift the reader’s focus from the action itself to simply trying to understand what just happened instead. Despite this, the second volume is still a very good book; the action, when you figure out what is going on, is highly entertaining and quite enthralling. A lot of the plot centers around the past, and how it’s made certain characters the way they are. It is told through a good mixture of flashback and characters’ dialogue. Unfortunately, this means that some of the plot threads from the first volume are abandoned for the exposition; however, that doesn’t mean they won’t be mentioned again in later volumes. There’s not much more that can be said on the story itself without revealing too much, but I will say that Nightow has maintained the same Trigun atmosphere with his blend of action, drama and of course, hilarious comedy.

One thing that the plot of this volume does particularly well is establish the characters. It is a well known plot device within fictional narrative that a gradual establishing of characters is a great way of developing them, and Nightow does this very well. He gives us enough backstory and more personality of the characters that we’re meant to like (or perhaps dislike depending on your character preferences), but at the same time, Nightow is still able keep maintain an air of secrecy with certain characters. This is best reflected in Vash, the main character, and his development in this volume. In the first book, he comes across as the typical happy-go-lucky, shounen protagonist who only ever shows a serious side when his friends are in trouble. The second book, however, goes further into his past and the rumours that surround him regarding mass murders. It shows Vash in a much darker light and does so in a very clever way — not from the events themselves, but within his psyche. It dramatically changes him from the smiley person he was originally portrayed to be, into a very sad and tragic character. It is very well-written sequence and quite different from the normal male protagonists shown in shounen manga.

Unlike the speed of the plot, the art has remained consistent. It is not uncommon for a manga’s art style to change over the course of time. Takeshi Obata, artist of Death Note, has stated that he had gotten used to drawing main character Light Yagami with less lines as the series went on and so when he was asked to re-draw Light for plot purposes, he said he struggled to go back to drawing him with more lines. It is similar for the series Shaman King; artist Hiroyuki Takei took a hiatus from the series, and it is noticeable that, upon his return, his art style changed. Over there three to four years of work spanning the start of omnibus one and the end of omnibus two, Nightow hasn’t fallen into this and it shows. The intricate artillery designs are still beautiful and the character designs are still nice to look at. The only criticism of the art would be that it can be very dark at times. It may sound weird, considering manga is coloured in black, white and varying shades of grey, but volume two uses a lot of heavy tones which can disrupt the visuals at times.

Overall, the second omnibus volume of Trigun is very similar to the first; a case of getting through the rough patches and getting to the gold. However, it offers far more depth than the first volume, and this is a trend that will hopefully continue as the series carries on.

Full Disclosure: This manga was reviewed using an advance PDF from Dark Horse.