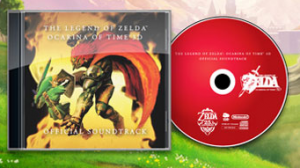 When The Legend Of Zelda: Ocarina of Time 3D releases you can get the Official Soundtrack for free by registering the game with your Club Nintendo account. It’s a “While Supplies Last” kinda offer so you will probably need to make sure your register on the release day, which is this Sunday June 19th.

The Legend of Zelda: Ocarina of Time 3D is a re-mastered version of the Nintendo 64 game. The game will not be just a straight port.   A touch-screen interface, new challenges not included in the original game, motion controls, as well as a newly implemented video hint system.  If you finish the game you can unlock the Master Quest – a second quest with revamped puzzles and redesigned dungeons.

The motion controls will be the biggest improvement.  Move the 3DS system itself to aim weapons like the slingshot, instead of using the control stick.  This control scheme was used in Steel Divers and it works really well .  So who plans on getting the game this Sunday?