After finishing my play-through of Dead Island, I exited the game and returned to the Xbox 360 dashboard. And to my surprise, I saw that Resident Evil 4 HD had been added to the Game Marketplace. Having played the game years ago, I was instantly excited to play it again. And if the universe wasn’t giving me more signals, I had just found an old Microsoft Points card I had forgotten to use, which had enough points for me to purchase the game.

Well, needless to say, 2 hours later (this is a large file folks, 3.96 GB), I was booting up the game, and I couldn’t wait to relive the adventures of bad-ass Leon Kennedy in glorious high definition. At that point in time, maybe I should have remembered that I was dealing with Capcom.

Now, I won’t go into a detailed analysis of why Capcom is ruining its name (that’s for another article…), but Resident Evil 4 HD just shows how Capcom is getting lazier, and how they truly don’t care about the consumer.

First off, the title is a misnomer. This game isn’t truly HD. Instead of redoing the textures and other art assets, Capcom simply up-rezzed the game. Granted, the character models and water affects have been enhanced, but most of the game has simply been upscaled to 1080p. This is apparent in the textures and other objects in the game (for example, the ammo boxes), which look very blurry and unclear. While this doesn’t completely ruin the experience, it is a let down for those who were hoping to re-experience the game in true high definition. 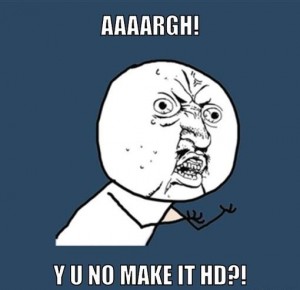 While some may be able to look past the sub-par graphical enhancements (I know I did), there are a number of smaller issues that make the game seem like a quick cash-in (let’s be honest, it is a quick cash-in). Unlike the Nintendo Wii edition, you are not able to tweak any control settings in this port. Except for being able to invert the y-axis, and switch between 2 preset button configurations, there are no other control options. This is quite infuriating, as I would have liked to re-map the “shoot” button to one of the triggers, as opposed to the X button (which cannot be changed). Considering the control schemes don’t even use all the buttons on the Xbox 360 controller, it doesn’t make sense as to why you can’t (at the very least) re-map a few commands. Although I don’t own a Playstation Move, support for the peripheral would have been a nice addition, and considering Capcom has coded the game for the Wii’s IR functionality, it makes less sense as to why there is no Move support.

As for the gameplay, this is the same Resident Evil 4 you know and love. The full campaign is included, along with the unlockable Mercenaries, Separate Ways, and New Game Plus modes. Aside from the lack of control customization, the game plays fine. At times, the sound is muffled, and when the action gets hectic, there are brief instances of slowdown, which some may find inexcusable, considering the game is running on a newer generation of hardware (though this might have to do with the way the game is emulated). The game now has Achievements/Trophies and leaderboard support, so you can rank your speed runs against players around the world.

So, what’s the verdict? Well, my recommendation is to pick this game up for the Nintendo Wii. Considering it is cheaper (I found it on Amazon.com for less than $10), and it has a much better control scheme, it is currently the best iteration of this classic game. If you never played the game, and you don’t have it for the PS2/GameCube/Wii, give this one a go, as it is worth the money (though I would still recommend the Wii version).  However, if you’re into PC gaming, and you can find yourself a copy of the game, get it for the PC and install a high definition texture pack.