After a lot of teasing, Capcom finally revealed the release date for Resident Evil 6. The game is set to be released on November 20, 2012 for Xbox 360 and PS3, with a PC release to follow shortly after.  Since the official reveal over the weekend, the game’s official twitter feed has been giving out snippets of information.  This includes story points; for example, Leon Kennedy will be investigating the infected city of Tall Oaks while Chris Redfield will be fighting in China.  Many of the tweets could be considered spoilers, so I won’t go into any more detail. 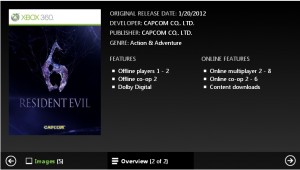 Today when the game was added to xbox.com‘s lineup, it revealed some information that had not been officially released through Capcom.  We’ll just treat this as rumor for now, even though I doubt that Microsoft would screw this up.  According to the description on xbox.com, RE6 will not only have multiplayer, but it will feature 6 player online co-op as well as 8 player online competitive multiplayer.

That is a fairly odd number for co-op play.  Typically co-op is usually limited to 2 players, while competitive multiplayer has varying amounts of players.  I asked Capcom to confirm the entry and they responded with the typical PR message.

We will be providing more clarification on RE6’s co-op & multiplayer modes in the coming months.

That’s about as clear as most PR Reps like to get when information is released early.  We’ll keep you updated about any changes, but in the mean time you can check out the official trailer below.