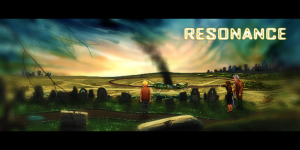 Critically acclaimed PC adventure game developer and publisher Wadjet Eye Games will release their next game, Resonance, digitally next Tuesday, June 19th. Arriving on their official site and GOG.com, it will also arrive on Steam in the near future. Coming from the official PR:

Resonance is an adventure game five years in the making from indie developer Vince Twelve, with a little help from publisher Wadjet Eye Games. When a brilliant particle physicist dies unexpectedly, the race is on to secure his terrible new technology before it falls into the wrong hands. The lives of four playable characters become entangled as they fight against the clock to find the dead scientist’s secret vault. The suspicions they harbor, the memories they guard, the connections they share — all will converge as these four ordinary people work together to prevent a potentially cataclysmic disaster.

Impressions from a preview version of the game are very positive. The game introduces you to the gameplay mechanics before throwing you into your choice of four stories, each taking place at a different point in time. The game then pulls everything together wonderfully after, putting you in a position where you must remember a system of usernames and passwords to discover some shady business. The game makes use of “LTM” and “STM”, referring to Long Term Memory and Short Term Memory, respectively. You can drag items into either of these, and then use that to trigger new conversations or conclusions — a very satisfying chain of events.

Publisher Wadjet Eye Games fully understands that you might want to try the game yourself though, and has sent along a demo build for you to try yourself. You may download it here, and it promises to introduce you to all four main characters, as well as offer a glimpse at the larger mystery within.

If the demo interests you, you can pre-order the game for 10% off with digital bonuses, such as the MP3 soundtrack, video developer diaries, and more. You could also splurge and spend $25 to get the limited Collector’s Boxed Edition, which contains even more content and comes with a digital copy of the game, so you can still start playing on launch day. More info can be found on the pre-order page here.