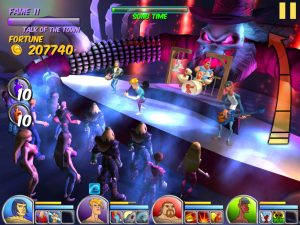 Ask the average child what they want to be when they grow up, and one of the most common answers you’ll receive is rock star. Who wouldn’t want to be a rock star? Playing music in front of thousands of adoring fans chanting your name, what more could you ask for? Guitar Hero and Rock Band took this ideology and captured the imagination of the very same people who wanted to be stars as kids. Mobile game developer LevelBit, has decided to bring this concept into their own game, Rise to Fame.

Rise to Fame is a music RPG that allows you to rise up from humble beginnings to achieve super-stardom. While on stage, you are able to do normal rock star things such as smashing your guitars, yelling to the crowd to hype them up, and dodging projectiles that are thrown by drunken idiots. Each member of your band has special skills that help you avoid the crowd’s wrath while at the same time rocking and rolling to please the crowd and complete the level. As you play each gig, you can use the money earned to buy performance upgrades like Star Power, Stage Dive, and Guitar Smash.

Rise to Fame also features 3D graphics, seven stage venues and 20 levels all together. The only downside of this game is that it isn’t free to download, as it costs $1.99 for both Andriod and iOS devices.