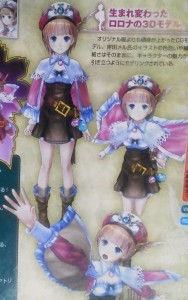 It looks like the first PS3 Atelier title will be getting a bit of a facelift, not that Rorona is looking all that old lately. New Atelier Rorona will feature updated character models, which will look truer to Mel Kishida’s designs. These redesigns will be handled by Tecmo Koei.

As reported by Siliconera, the upcoming remake of Atelier Rorona will feature new events and an altered time system. There will also be new characters, costumes and trophies for players to seek out, but perhaps the most interesting feature is that New Atelier Rorona offers cross-play between the PS3 and Vita versions of the game, meaning that players will be able to take their synthesis addictions on the road with them. New Atelier Rorona will use a modified Atelier Meruru battle system, which gives players more options in battle.

When Vita remakes of Totori Plus and Meruru Plus were released, there were rumblings that Rorona may not receive the same treatment. However, clearly what Gust produce Keisuke Kikuchi meant when he said he didn’t want to do a port was that he wanted to truly remake the game instead.

For those who have save data from the other two Vita games, as well as data from the not yet released Atelier Escha & Logy, will receive bonus content in New Atelier Rorona.

The game is set for a release on both systems in Japan this November, so expect more information to drop between now and then, including a possible North American release date.