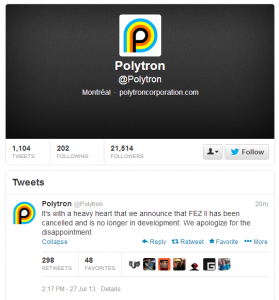 If you were excited when Polytron Corporation put out a trailer on June 13 announcing Fez II, the sequel to Phil Fish’s critically-acclaimed puzzle game, you might want to prepare yourself for some possible bad news.

Today, Polytron Corporation announced on their Twitter account that Fez II is “cancelled and is no longer in development.” So far, there’s been no official statement regarding the reason for this change, but there hasn’t been any move to retract it, either.

According to NeoGAF, Phil Fish first posted on his personal twitter that he was stopping development of Fez II. Shortly afterwards, Polytron also tweeted the cancellation. The Escapist has reported that Fish made his announcement in response to a particularly scathing round of attacks from a show on GameTrailers.

Fish had sworn off Twitter several months ago after multiple run-ins with gamers, and since making this cancellation tweet, Fish has locked his account, making all of his posts private.

Perhaps when things cool down a bit, the situation will change. Meanwhile, stay tuned to The G.A.M.E.S. Blog for more information as this story unfolds!

Updated (7/27/13 at 4:52 p.m.): Polytron has further confirmed the cancellation of Fez II. The post was made public less than an hour ago, and a screenshot of it can be seen below. While no official details regarding the decision have been announced, Polygon confirmed the argument on Twitter between Phil Fish and Marcus Beer from GameTrailers, which Fish has since made private.