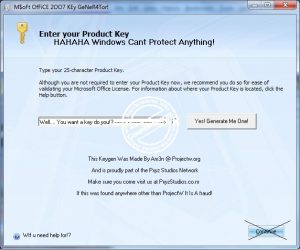 The gaming website PS3-Sense (via thinq.co.uk) is reporting that “a very reliable source”  has told them that serial keys will be used on new games starting very soon.  Sony is doing this because they know that they cannot patch out the loss of the master signing keys that Geohot and failOverflow found.  The master signing keys make homebrew and pirated games to load as if they were Official Sony licensed software.

Those who play PC games will be quite familiar with the serial key system.  The idea is that each game will come with a unique code that must be entered before the software will play.   The hope being that this will prevent new releases from being easily pirated.  But as anyone with a PC knows, it will only take a day or two to program a key generator.  So this will only affect legitimate buyers as they try to use their code and find that some pirate has already entered it using the keygen.

There is a second effect this will have if true.  It will completely destroy the second hand sale and rental market.  Gamefly will not be able to rent games if you have a unique code that can only be used once.  You will not be able to trade your games at Gamestop or sell them on EBAY or Amazon.  This also happened in the PC market.  You’ll notice that you cannot buy used copies of PC games because of systems like this.

Then we will have the possibility of several  scenarios playing out here.

So what do you think folks?  Is the PS3 dead?  Can Sony close the barn door after the horses have run out?