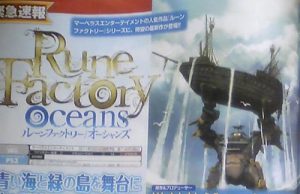 Looks like the Move is getting its first Wii port :p . A reader of Kotaku sent them a scan of a promotional poster for a new Rune Factory game. The next Rune Factory, a spin off of the Harvest Moon series, will be coming to the PS3 and Wii this February, in Japan at least.

The previous 3 games were all Nintendo exclusives (2 DS, 1 Wii). Rune Factory: Frontier (Wii) allowed users to swing the Wiimote to use their swords, or to use their hoe to plow the land. It is expected that a similar element will be in Rune Factory: Oceans. Not much else is known at this time except that you will have to chose to play as a boy named Azel or a girl named Sonia. Hopefully this will not simply be a superficial choice and both will get unique story lines to follow.

The Rune Factory games are a cross between dungeon crawling RPGs and Farming Simulators. In each one you have a farm you have to raise crops and monsters on. While your not farming you can go exploring the land, defeating monsters, prospect for minerals, do a little alchemy, and woo one of the pretty ladies / handsome men from the near by town.

Now the big question is……..Will the PS3 version get HD graphics or will it be a straight port of the Wii?