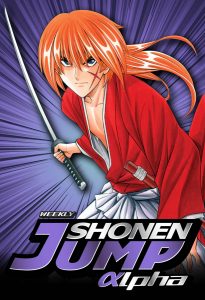 The original series follows the swordsman Himura Kenshin as he wanders the land to protect others without killing. Along his journey, Kenshin befriends dojo master Kaoru, streetfighter Sanosuke, a young boy named Yahiko, and many others. Kenshin made a vow never to kill another person after the fighting of the Age of Restoration came to an end. However, before that vow, Kenshin was an assassin known as the Hitokiri Battousai. Throughout the story, parts of Kenshin’s past catch up to him, and he must fight to protect the people he has come to love.

It sounds like the reboot will preserve the original story, but VIZ notes that Watsuki has added some new plot twists. Paying members of Shonen Jump Alpha can read the first chapter in this week’s issue. There’s no word yet on whether the reboot will see a physical publication, but we’ll keep you posted.

This month also brings shojo fans a new manga to read through Shonen Jump Alpha. Honey and Clover will debut on May 28th. This series by Chica Umino folows an art student named Takemoto. Takemoto’s biggest worry is making it to class on time, but his crazy friends would never let his life stay that tame.

In addition to these two new Shonen Jump Alpha series, VIZ Media announced that it will continue its May manga promotion for the next two weeks. Each week, digital versions of select first volumes will be 40% off the usual price. Check out the list below to see which series are involved in the sale. You can purchase and read these volumes through VIZManga.com or through the VIZ Manga iOS app.

Discount Titles for May 21st:

Discount Titles for May 28th:

You can access Shonen Jump Alpha for $25.99 a year, or you can pay $0.99 to access a single issue for four weeks. You can view the digital magazine through its website or through the VIZ Manga app. This app is free through the iTunes Store, though you have to purchase the volumes want to read.

Do you use any of VIZ Media’s digital services? What do you think about the Rurouni Kenshin reboot? Share your thoughts with us in the comments!