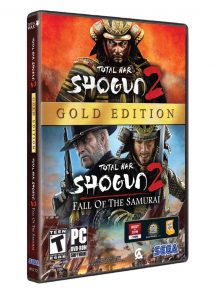 Fans of the Total War series will soon have a chance to get Shogun 2 and all its expansions in one tidy little furoshiki. The award-winning strategy game will be packaged along with Rise of the Samurai and subsequent Fall of the Samurai expansions. The Gold edition package, developed by The Creative Assembly and published by Sega, will be available for PCs on March 5th.

If your preference is for British buttkickers over Japanese bushido, you’ll have a chance to download Bayonetta from the PSN as soon as January 29th. The beat-em-up action title will run you $19.99 off the North American store, and will release in Europe on January 30th for £14.99. If you aren’t sure about picking up Platinum Games’ Bayonetta, you can check out my review, which is about to turn 3 years old.