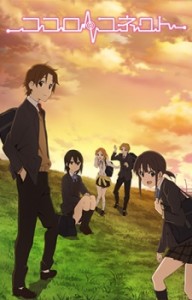 FUNimation isn’t the only company to be busy with licenses recently. Sentai Filmworks announced three new anime properties, two of which are debuting in Japan just this month.

The first title, Kokoro Connect, will debut in Japan on July 7th, and will be available for streaming on Crunchyroll. The series is based on a light novel collection by Sadanatsu Anda and features five students in Yamahoshi Academy’s Culture Club. The comedic anime follows their lives after a strange event causes them all to switch bodies.  Sentai will release a DVD version sometime next year.

The other simulcast title is Tari Tari, which launched on July 1st and is currently available on Crunchyroll. The story of Tari Tari follows five high school students stuck in the gap between childhood and adulthood. The five adolescents come together to form a new choir club after Konatsu quits the school club and starts her own. Their goal is to become a real ensemble during their final summer together in high school.  Like Kokoro Connect, Sentai is planning a home DVD release next calendar year.