First on the list is Haganai: I Have No Friends (Boku wa Tomodachi ga Sukunai), by Yomi Hirasaka and Itachi. Haganai follows a group of outcasts trying to improve their social skills. Hasegawa Kodaka has blond hair and an unpleasant gaze, which make it difficult for him to make friends. When he meets a loner named Mikazuki Yozorai, whose only friend is imaginary, the two create “The Neighbor’s Club” to find some real-life friends. This series also has an anime adaptation that FUNimation picked up the rights to release earlier this year. See our previous coverage for more information. 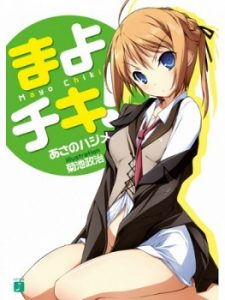 The second manga announced was Mayo Chiki!, a gender-bender by Hajime Asano and Niito. Mayo Chiki! Tells the story of Kinjiro Sakamachi, a seventeen-year-old boy with an abnormal fear of women. Kinjiro’s world changes when he accidentally discovers that the popular Konoe Subaru is a girl. The principal’s daughter, Kanade Suzutsuki, needs this to remain a secret, so she torments Kinjiro to keep him quiet and attempts to cure his gynophobia. Mayo Chiki! is based on Asano’s light novel series, which has also been adapted into an anime.

Volume 1 of Haganai: I Have No Friends will be released in November 2012, and the next volume will be available the following February. Mayo Chiki!‘s first volume is set for a December 2012 release, with Volume 2 to arrive in March 2013.

Seven Seas Entertaniment is known for licensing manga such as Dance in the Vampire Bund and Toradora! For more information on their other Seven Seas titles, check out their website.