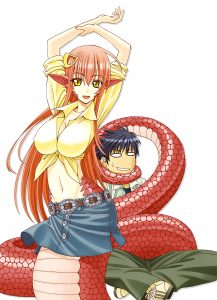 Starting this fall, Seven Seas Entertainment will be releasing three new manga series, each centering on supernatural creatures in their own way. Kei Murayama’s A Centaur’s Life follows Himeno, a shy, teenage centaur, as she attends highschool and lives a fairly normal life for a mythical being. The series follows Himeno and her friends Nozomi and Kyoko at a school filled with all manner of creatures: those with wings, horns, tails, and what have you.

Love in Hell, by Reiji Suzumaru, follows a bit of a different tack. Rintaro was living an average life until one day he falls to his death and wakes up in Hell. When he comes to, he finds devil girl Koyori there as his guide, and she’s out to tease and torture him until he repents. All because he got a little too drunk one night.

Okayado’s Monster Musume takes place in a world where harpies, centaurs, catgirls and all sorts of other creatures are real. They managed to remain in hiding until three years ago, and now the “Cultural Exchange Between Species Act” is trying to bring them into human society. Now, Kurusu Kimihito has been selected to play host to a lamia named Miia, and despite their physical differences, he finds himself attracted to her. But is it love or just a case of raging teenage hormones?

Love in Hell and Monster Musume are both set for October release (just in time for Halloween), with A Centaur’s Life trotting out in November.