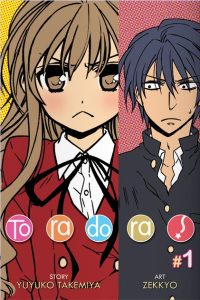 If you’re looking for a taste of Seven Seas Entertainment’s upcoming release of the Toradora!, you’re in luck. Over at GoManga.com, you can now see the first chapter of the English translation of the manga. The first volume is due out in March, with the subsequent volumes coming roughly every three months.

Toradora! started off as a 10-volume light novel series written by Yuyuko Takemiya. Since then, it’s spawned a three volume light novel spin-off, an ongoing manga series by Zekkyo, and an anime series. NIS America has already released the anime series in two parts, and you can read our reviews here and here.

The story of Toradora! centers around a pair of high-schoolers, Ryuji and Taiga, and their circle of friends. Ryuji is often mistaken for being a thug because of his face while Taiga is far more fierce than her cute looks might suggest. The two end up friends because neither can seem to get close to their love interests, and they enlist each other for help.