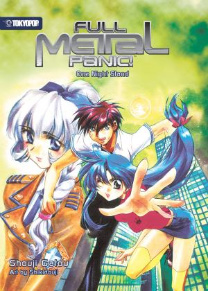 AnimeNewsNetwork announced yesterday that Shoji Gatoh, via his personal blog, intends for the current volume of Full Metal Panic to be the final full-length novel. He left the door open for doing short stories in the future, but for the time being, he wants to move on to other works.

Gatoh has written 20 volumes of light novels for Full Metal Panic! which have spawned 3 seasons of anime and multiple manga series. Funimation holds the licensing rights to the 3 seasons of anime in North America, and Tokyopop has translated the first 3 novels into English while ADV has translated the manga adaptation by Fujimi Shobo. In April 2009, Mandalay Pictures announced a live action film adaptation featuring Zac Efron, but Efron has indicated that it is little more than a rumor right now.

Full Metal Panic! features Sousuke Sagara, a skilled soldier for the mercenary group Mithril, and his mission to protect Kaname Chidori, the seemingly normal 16-year-old student at Jindai High School. Unfortunately for Sousuke, all the years he has spent in the military didn’t train him for how to act undercover as a high school student. Much of the comedy in the series centers around his fumbling and faux pas as he tries to function in society while the action in the series focuses on Mithril’s anti-terrorist activities. While no set date has been announced, Gatoh has indicated that he should be finished writing the last novel sometime this spring.