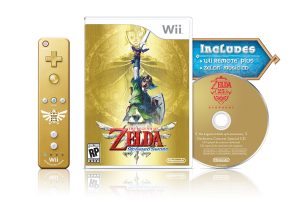 As part of the continuing celebration of the 25th anniversary of The Legend of Zelda a special limited-edition bundle and a music CD for Skyward sword is coming. The bundle will contain the game, a Zelda branded gold Wiimote Plus, CD featuring performances from the The Legend of Zelda 25th Anniversary Symphony Concert.

The limited-edition gold controller bundle for The Legend of Zelda: Skyward Sword will be going for $69.99. The game by itself will be $49.99.  The gold controller will only be available as part of the bundle.   The CD is only being packaged with the initial release stock.

The game launches on November 20th.