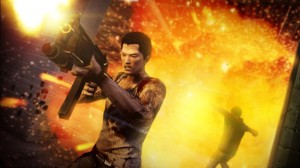 Square’s and United Front Games’ forthcoming open world Sleeping Dogs finally has a release date. The driver/puncher/shooter/undercover cop game will be available on August 14 for Xbox 360, PS3, and PC.

Best Buy will grant gamers the “George St. Pierre” Pack, which will come with the mixed martial artist’s signature flying punch and an exclusive outfit that increases grappling and throwing damage.

GameStop pre-orders get the “Police Protection” pack, complete with an exclusive mission, SWAT outfit and vehicle, and assault rifle.

Finally, those who order from Amazon have access to a Shaolin Showdown mission, a Shaolin Warrior outfit that increases striking damage, bonus XP, and an exclusive decoration for the player’s safe house as part of the “Martial Arts” pack.

Will you be pre-ordering Sleeping Dogs? If so, which of these bonuses entice you the most? Let us know!