NIS America continues their tradition of releasing fun games with long titles with their upcoming PSP game Z.H.P.: Unlosing Ranger VS. Darkdeath Evilman. We were lucky enough to get our hands on an advance copy, and I wanted to share my early thoughts on the game. This won’t be a full review, but you can expect one of those closer to the October 26th release date.

In Z.H.P., it is the superhero Absolute Victory Unlosing Ranger’s job to stop the villainous Darkdeath Evilman from kidnapping or killing the greatest hope for mankind, Super Baby. Unfortunately, Unlosing Ranger just happens to be running late for the decisive battle and gets killed in a car accident. You play a hapless bystander who gets roped into saving the world in his stead when, with his dying breath, he gives you his utility belt and asks you to be his replacement. Unfortunately for you, he dies without you getting much of a chance to decline, leaving you with one mission: go out there and get yourself killed. As the newly annointed Unlosing Ranger, you show up to battle only to be beaten nearly to death by Darkdeath Evilman. Luckily, before he can strike the final blow, you are brought to Bizzaro Earth where you can train to become a true hero.

Bizarro Earth houses the World Hero Society, your base of operations for the game. There you can store items you find during training, perform body modifications to strengthen yourself, repair your equipment and more. It is also the launching point for you to travel into the randomly-generated dungeons that you will use to become a hero worthy of the name Unlosing Ranger. Once you talk to Etranger, your trainer, you select a dungeon area to visit. New areas are unlocked as you progress through the story, and you can return to old ones later on to train more or collect items. 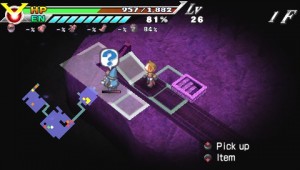 In the dungeons, you are on your own. You guide your hero and only your hero down into the depths of each dungeon, killing off monsters and collecting the various treasures that you find laying about. Your movement in the dungeon is very reminiscent of how roguelikes such as NetHack work. Every time you take a step or take an action, the enemies can also move, attack or charge up a spell. Some of the other rules of Z.H.P. also borrow from roguelikes such as the big penalty for dying: almost everything you have with you gets left in the dungeon and is gone forever. There are certain body modifications that you can add to keep things with you if you die, but you’ll have to survive for a while to be able to buy them.

The game also makes full use of NIS America’s humorous localizations. The character name are full of puns (two British girls with the last names Fisher and Chips) and they are not afraid to make fun of the game itself. Early on, your battles against Darkdeath look like an original NES era Dragon Warrior game, and as you play, the battles will improve in graphical quality. However, even the characters make fun of the graphics saying things like “The reason that the battle screen looks like manufactured ass is because the main character sucks! That’s why!” and “Can’t we just sell it by saying ‘We’re going for a retro look’ or something?” 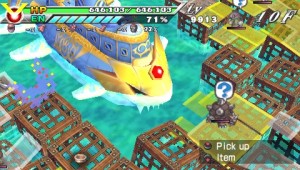 Of course, that’s not to say the game looks terrible at all.  The characters are sprite-based like most Nippon Ichi titles, and the graphical quality is comparable to that seen in their PSP port of Disgaea 2, and most of the game, except for some of the cutscene battles, takes place in an isometric view.

Z.H.P. Unlosing Ranger VS Darkdeath Evilman is a fun take on the dungeon-crawler genre. If you enjoy roguelikes and the humor of the Disgaea series, you should give this game a whirl. If you’ve never played a roguelike before because they are generally pretty cutthroat, this one has a much more manageable learning curve than most. If you’re interested, you can preorder the game now from retailers or NIS America’s site or wait until it is released on October 26th. As mentioned above, we’ll have a full review of the game with scores for you closer to release day, too.

Full Disclosure: Both this preview and the forthcoming full review were played on a copy provided by NIS America.