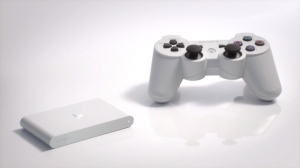 Earlier this morning, Sony Computer Entertainment Japan held a press conference in anticipation of Tokyo Game Show, which begins next week. Along with the software detailed, Sony announced two new pieces of hardware: a lighter and slimmer PS Vita, and an entirely new device called the Playstation Vita TV. The Vita TV, as detailed in the press release, is a small (roughly 2.5 by 4 inches) white box that connects to a TV over HDMI and can play PS Vita, PSP, and PSOne games. It only features a PS Vita card slot, however, meaning that any PSP or PSOne games will have to be downloaded via Wifi or Ethernet. You’ll probably need to buy a memory card for that, though, as the Vita TV only includes 1 Gigabyte of storage.

In addition to the games natively compatible, the Vita TV also will support remote play from the PS4, just like the Vita itself. This feature will allow you to have a PS4 elsewhere in your home, and the Vita TV will stream games from the PS4 to whatever screen the Vita TV is connected to. Sony has not detailed exactly how this system will work, but it will require a Dualshock 4 controller and a future system update.

It isn’t all about games though, as Sony announced the Vita TV also features support for quite a few video services. They mentioned services such as Hulu, Tsutaya TV, SKY On-Demand, and more, with additional video services coming eventually.

Sony has announced the Vita TV will be released in Japan on November 14 for 9,954 yen (about $100 US), or in a bundle with a memory card and Dualshock 3 controller  for 14,944 yen (about $150 US). They have not yet announced any plans to bring the device to any other territories.