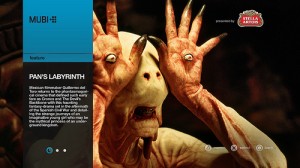 The Sony Europe Blog has announced a partnership with the movie site MUBI. MUBI is essentially an online movie rental service mixed with social networking. What movies can you get? They claim they go for quality over quantity so anything that says “Cannes Film Festival” or any of the other artsy fartsy film festivals will be there. To be serious they will specialize in Independent, Classics, and World Cinema. Which is one way of saying you won’t be seeing much that comes out of Hollywood, California. This could be good as Hollywood has been pushing a lot of crappy remakes these days.

As for the social networking, it has a basic profile page for members that allows you to post your thoughts and have others respond and follow. As an example here is Martin Scorsese’s profile. Yes it is his real profile.

So what will this cost you ask? The movies average about $5 and the rental lasts 1 week.

The truth is, we can’t even start explaining. But let’s try this: At the moment, some of us are at the Cannes Film Festival announcing a major collaboration with SCEE for PS3. So, soon, you will find a new application on your console, which will let you stream the best of international cinema from the comforts of your couch. This is not a simple virtual videostore; we emphasize quality over quantity. You’ll find undistributed festival gems ripe for your discovery, your favorite recent independent and art-house releases. Names like the Coen brothers, Godard, Kitano, Almodóvar, Tarantino, and Van Sant are some we’ll bring home to you.

The official announcement is being made today at the Cannes Film Festival. MUBI for PSN will initially launch in the UK, Italy, France, Ireland, Iberia, Germany, Austria, Switzerland, Benelux, Nordic countries, Australia and New Zealand. No word on if the US will get the service, but since Netflix has most of these films as well we probably don’t need it. But for those who wish to try out the service it is available to anyone with an internet connection.