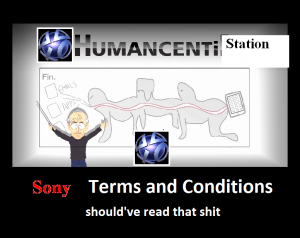 The latest TOS that was released today is not just about the transfer of all Sony services to the new SONY NETWORK ENTERTAINMENT INTERNATIONAL (SNEI). They decided that the new agreement needs a binding arbitration clause and a waiver from class action lawsuits.  I guess they are tired of all the lawsuits over the PSN hack.

Arbitration is handled under the Federal Arbitration Act where a “neutral” third party (typically chosen by the business you have a complaint against) hears your argument and decides if your complaint is valid.  If you think this can in anyway help the consumer the Christian Science Monitor found a disturbing trend in the outcome of cases from one of the biggest arbitration companies in the US.  “…the National Arbitration Forum’s 10 most frequently used arbitrators – who decided almost 60 percent of the consumer-related cases heard by the National Arbitration Forum – decided in favor of the consumer only 1.6 percent of the time.”

There’s a nice article here that gives lots of details on arbitration, why companies use them, and why they are horrible for the consumer.  It even details some of the rules of the American Arbitration Association that is the arbitrator or choice for this agreement with Sony.

Under these consumer rules, there is a filing fee of $125 if your dispute is under $10,000 and $350 if it is over that amount, according to Naimark. However, in exchange for the low filing fees and streamlined process, you must give up some of your rights (empashis added), says Thomas Campbell, an attorney in Birmingham, Ala., who handles many pest control disputes that have ended up in arbitration.

“In order to get that cut-rate deal, you have to agree to limit your monetary recovery to $75,000 as well as your right to get an equitable remedy,” he says. Bland adds that this streamlined process also means there is no hearing, no discovery and no filing of legal briefs. The arbitrator in these cases frequently bases his or her decision on documents filed by each party.

Campbell and his clients have found that it costs $12,000 to $16,000 to go into arbitration under the commercial rules and that much of that has to be paid upfront. There is no contingency in arbitration. Also, these costs don’t include costs for an attorney if you want one. Bland says that in many cases, a consumer’s cost can easily exceed $10,000. “We’ve seen employment cases in arbitration where the fees go as high as $50,000 for the consumer,” he says.

So you can’t sue them,  if you go into arbitration not only will it cost thousands, and you have to give up your right to get pertinent information from Sony (that’s the discovery clause).  Until some court rules the TOS invalid you have only one out.  You have to notify Sony in writing within 30days of agreeing to the TOS of your intention to not be bound by arbitration or to give up your class action rights.

YOUR WRITTEN NOTIFICATION MUST BE MAILED TO 6080 CENTER DRIVE, 10TH FLOOR, LOS ANGELES, CA 90045, ATTN: LEGAL DEPARTMENT/ARBITRATION AND MUST INCLUDE: (1) YOUR NAME, (2) YOUR ADDRESS, (3) YOUR PSN ACCOUNT NUMBER, IF YOU HAVE ONE, AND (4) A CLEAR STATEMENT THAT YOU DO NOT WISH TO RESOLVE DISPUTES WITH ANY SONY ENTITY THROUGH ARBITRATION

This is pretty genius legally.  Most wont read the TOS and so wont send in this notice.  This means that the few that so will have a hell of a time finding folks that they can bring into a class action with them.  So Sony will still probably never get a class action against them.

If you insist on using Sony products still then be sure to get that written notice in and warn your friends about it.  Or the next time SONY is hacked and you credit card and personal details are stolen you will not be able to get any sort of recuperation from them.

You can also read up some more on the history of arbitration at wikipedia.