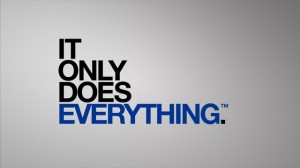 Sony’s marketing campaign always maintained that the PS3 only does everything before it removed the “Other OS” option. Little did they know how close to the truth they were. Unfortunately, as this Ars Technica article points out, the removal of Linux with a recent update might cause them to lose one of their biggest customers and hurt military research all in one fell swoop.

The power of the PS3’s cell processor and graphics units have been put on display thanks to a wide variety of games, but I doubt Sony ever truly intended for them to become a staple of academic and military research. I had heard stories about researchers chaining them together to create powerful yet inexpensive processing nodes, but I never knew the scale. I knew of the “Gravity Grid” at the University of Massachusetts that uses 16 PS3s, but apparently that’s a drop in the ocean. According to Ars Technica, the Air Force purchased over 2000 PS3s, combined with some Xeon server hubs, to create a set of formidable super-computing clusters. The cost of a PS3 is far lower than building a system from scratch with comparable power, cutting government expense by “an order of magnitude.” The prototype, created in 2009, used 336 PS3s and created a system capable of 53 teraFLOPS (floating point operations per second). By comparison, an average quad core processor operates at about 30-50 gigaFLOPS, or about 1000 times lower.

So, where’s the problem? Well, everything is OK right now, as the Air Force doesn’t have any reason to be on the PlayStation Network; so, they don’t have to updated to the new system firmware. Unfortunately, if they want to expand their clusters or replace a faulty system in the future, none of the new PS3s will have a Linux installation option. So, once enough of the PS3s fail, the government will be left with some very expensive paperweights unless one of two things occur: 1) Sony loses their current class-action lawsuits and must return the Other OS option in future firmware updates or 2) The government gets their hands on a copy of the previous firmware and performs a rollback on all of their systems, which may or may not work and is, at minimum, a violation of the EULA among other issues. Further complicating this option, Sony does not make previous firmware updates publicly available.

I was annoyed by the option’s removal just as a matter of wanting to play around with Linux on my PS3, but the fact that it impedes upon research is a much bigger issue. Hopefully, there’s a positive resolution from all of these firmware issues that allows the Air Force to continue using their processing clusters and not just wasting a ton of money. The government does that enough already.